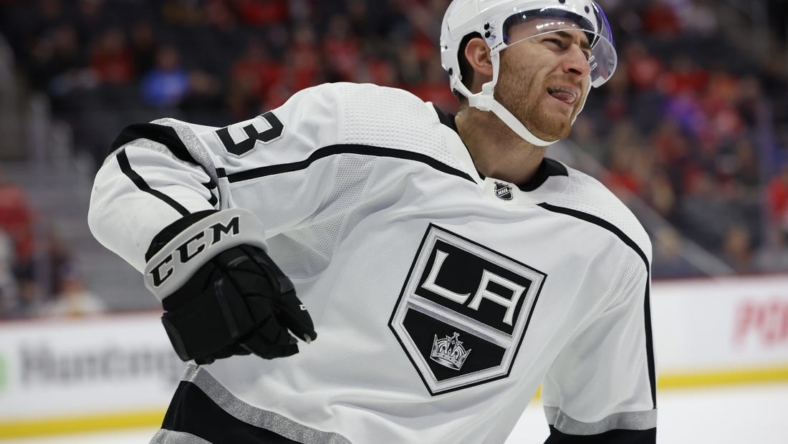 Gabriel Vilardi wasn’t even assured of a roster spot when the Los Angeles Kings opened training camp in September.

However, the 23-year-old center has exceeded expectations right from the start this season, and the Kings will look for him to stay hot when they visit the Dallas Stars on Tuesday night.

Vilardi had a goal and an assist in Los Angeles’ 5-1 victory over the St. Louis Blues on Monday night to open the Kings’ three-game road trip.

Vilardi has recorded a goal in four straight games and has eight overall this season, tied for second most in the NHL. He has found a home on the top line with Anze Kopitar and Adrian Kempe.

“It’s really refreshing to see him walk into the rink, he’s sticking his chest out a little, he’s smiling more, he seems to be enjoying the whole package,” McLellan said after Vilardi scored a goal in a 4-2 win against the visiting Toronto Maple Leafs on Saturday. “He’s earned the opportunity to feel that way, and as a result, he’s playing that way.”

Vilardi, who was selected 11th overall in the 2017 NHL Draft, scored 10 seconds into his first shift with the Kings on Feb. 21, 2020, setting a franchise record for the fastest goal to start a career.

The COVID-19 outbreak ended that season shortly afterward, and Vilardi had difficulty gaining traction in the lineup with the Kings, splitting last season between Los Angeles and the Ontario Reign of the American Hockey League.

As a restricted free agent, Vilardi signed a one-year, $825,000 contract extension with the Kings on July 23.

“I had more to prove this year,” Vilardi said. “I just worked hard this summer and I’ve taken the same mentality into the season. So far it’s been good, but a small sample size. I want to be a good player for a long time.”

The Stars won’t have goalie Jake Oettinger against the Kings. He sustained a lower-body injury against the visiting New York Rangers on Saturday when his skate got caught on a post. His injury will be re-evaluated in a week.

After Oettinger departed with the score tied 2-2 in the second period, the Rangers scored four goals on 17 shots against his replacement, Scott Wedgewood, in a 6-3 victory.

“He’s obviously a big part of our team, if not the biggest,” Stars forward Jason Robertson said of Oettinger.

Because of salary-cap limitations, Dallas could not recall veteran goalie Anton Khudobin from Texas of the American Hockey League, so they signed 24-year-old Matt Murray to an entry-level contract on Monday. Murray, not to be confused with the two-time Stanley Cup-winning goalie of the same name who is now with the Toronto Maple Leafs, likely will serve as the backup against the Kings.

The Stars received some positive injury news when defenseman Miro Heiskanen returned to practice on Monday after missing the past three games with an upper-body injury.

Stars general manager Jim Nill also announced that 19-year-old center Wyatt Johnston would remain with the Stars beyond the ninth game, which will burn the first year of his entry-level contract, regardless of whether or not he returns to the junior level at a later date.

Johnston, the 23rd overall pick in the 2021 NHL Draft, has three goals and an assist through his first nine NHL games.