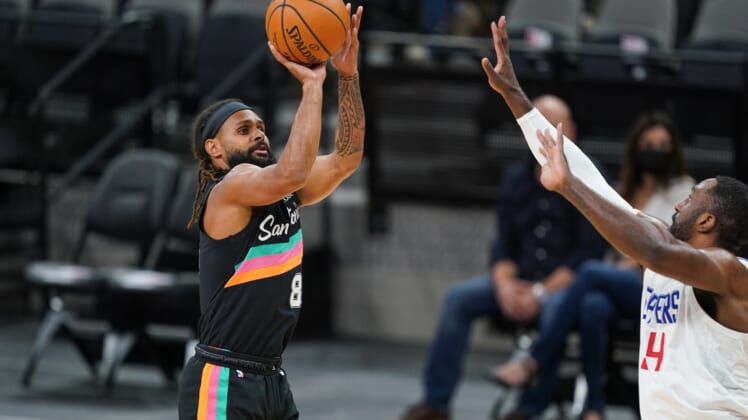 The San Antonio Spurs will look to build off their most complete game of the past two weeks when they host the struggling Atlanta Hawks on Thursday.

The contest will be the second of a home back-to-back for the Spurs, who beat the Sacramento Kings 120-106 on Wednesday to win for the second time in three games.

San Antonio is just 2-4 on its ongoing, franchise-high, nine-game homestand. The Spurs haven’t won consecutive home games since Feb. 3 and Feb. 8, and that was with a road win in between.

On Wednesday, DeMar DeRozan poured in 26 points and six of his San Antonio teammates scored in double figures in the second of two games in three days against the Kings.

Sacramento won the first game 132-115 on Monday, but the Spurs rebounded in a big way. San Antonio led by 16 at the half and by 23 midway the third quarter and never allowed the Kings closer than 13 points in the final period.

“To be honest, it is a little bit of pride,” Spurs reserve guard Patty Mills said. “It’s not like it was a massive change in the game plan, if any at all — it was just executing the game plan better than we did the other night. We felt like we dropped one on Monday when we didn’t play our best. We’re trying to really get better as a group, and we’ve did that (Wednesday).”

Atlanta heads to San Antonio following a 117-110 road loss to the Phoenix Suns on Tuesday. The Hawks have lost four of their past five games.

Atlanta trailed by as many as 16 points on Tuesday before roaring back to tie the game at 103 on two Trae Young free throws with 3:31 to play. However, the Hawks never got the lead and faded down the stretch.

Bogdan Bogdanovic paced Atlanta with 22 points, with Young adding 19 points and 13 assists. Clint Capela scored 16 points and grabbed 16 rebounds, and Dario Gallinari and Kevin Huerter hit for 13 and 12 points, respectively, off the bench for the Hawks.

“(Phoenix) made big baskets down the stretch,” Atlanta interim coach Nate McMillan said. “They got offensive rebounds. Offensively, for us, when we had possession, we had worked our way back into the game but we had a couple turnovers down the stretch and we missed a couple of open looks. That’s the difference between winning basketball games.”

The Hawks played in Phoenix without Lou Williams, who has not been activated by the team and missed his third game since his trade from the Los Angeles Clippers on March 25.

Williams, in his 16th NBA season, revealed on Tuesday that he considered retirement after the trade, but he is ready to move forward with a clear head.

“Now that I’m here … I’ve been embraced,” Williams said. “The guys, it seems like they want me here. So I’m ready to get back to work. I’m going to make this push and move forward.”

Atlanta was also missing De’Andre Hunter, who has a sore right knee, and John Collins didn’t see the court in the second half after spraining his left ankle in the first half.