Not willing to risk free agency or even an eventual franchise tag, the San Francisco 49ers got out in front of a lucrative contract extension for elite linebacker Fred Warner on Wednesday.

That’s some Monopoly money right there.

Warner deserves it, though. He was rated as Pro Football Focus’ top linebacker last season, and although he’s stout as a run defender, where Warner really shines is dropping in coverage.

Having an inside linebacker who can cover tight ends and even hold his own against slot receivers is a defensive coordinator’s dream.

You can bet new 49ers play-caller DeMeco Ryans, who himself was a former star linebacker in the NFL, was pounding the table and imploring San Francisco to get Warner locked up for the long haul. To their credit, GM John Lynch and head coach Kyle Shanahan saw Warner’s obvious value and knew there was no time to mess around.

Warner’s contract isn’t the first massive payday the 49ers have dished out in recent months. They also made left tackle Trent Williams the highest-paid offensive lineman in the NFL with a mega deal for him.

Between those two moves and the decision to trade up from 12th to No. 3 overall in the 2021 NFL Draft to select quarterback Trey Lance, it’s been a splashy offseason in the Bay Area.

Credit the 49ers for not resting on their laurels and being willing to shake things up. They could’ve rolled with Jimmy Garoppolo instead of Lance going forward, since Jimmy G led them to a Super Bowl following a phenomenal 2019 campaign. But nope, they took a big swing with Lance that could pay huge dividends as soon as this season.

With arguably the NFL’s best left tackle locked in place and the most dynamic young linebacker in the sport this side of Devin White extended in Warner, the Niners are being aggressive in the near term to secure their future. 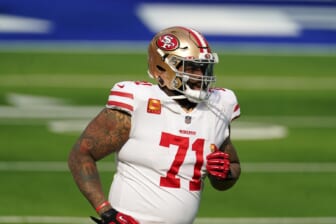 To circle back to Ryans for a second: He has big shoes to fill in place of Robert Saleh, who’s now the head coach of the New York Jets. Because San Francisco has somewhat limited secondary depth and plays in the best division, the NFC West, Ryans’ job won’t be easy.

What’s great is that the 49ers don’t have to concern themselves with Warner potentially holding out or feeling uneasy about whether he’ll still be in the fold beyond 2021.

Lance’s dual-threat ability may lift Shanahan’s already-brilliant offensive scheme to another level. As long as Warner continues to play the way he has, the 49ers can build a strong front seven around him, Nick Bosa and Arik Armstead. That should be enough to keep San Francisco’s championship hopes alive for years to come.