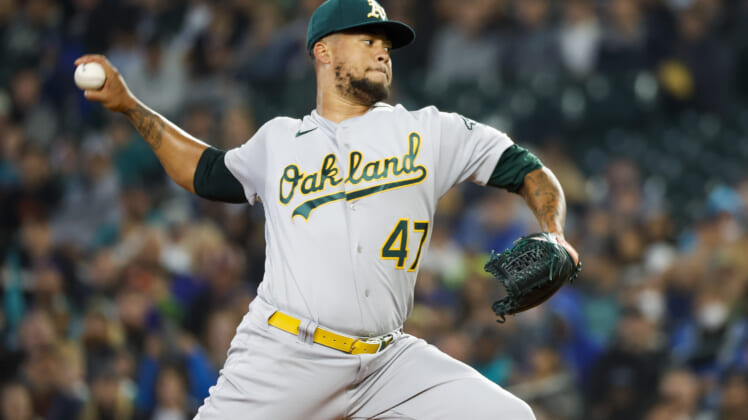 Castillo, the best starting pitcher available at the MLB trade deadline, came off the board Friday night when the Seattle Mariners acquired him for a prospect package headlined by Noelvi Marte. Given Cincinnati insisted on Anthony Volpe being included in any deal for Castillo, it comes as no surprise that New York is now looking elsewhere.

While the Yankees have one of the best rotations in baseball, there is room for improvement. Cashman wants to find a reliable No. 2 starter to slot in behind Gerrit Cole, specifically targeting an arm under contract through the 2023 season.

Montas has made two starts since being sidelined by right shoulder inflammation, building his arm strength and pitch count back up. After proving he can return to a full workload, Oakland is expected to trade its ace by Aug. 2.

According to MLB insiders Jon Heyman and Bob Nightengale, Montas is now Cashman’s No. 1 target heading into the final days of the trade deadline.

Given New York’s desire for a front-line starter and Oakland’s interest in rebuilding, there are a few possibilities that could work out between these two clubs.

New York Yankees use Oswald Peraza for a blockbuster deal

If the Yankees wouldn’t move Volpe for Castillo, it’s fair to say he won’t even be considered in the best offer the Athletics could make. Fortunately, fellow infield prospect Oswald Peraza could be a nice consolation prize as the centerpiece of a deal.

New York certainly only considers this deal if its doctors clear Montas medically. If that happens, a willingness to send one of the top infield prospects in MLB to the Athletics would likely go a long way at the negotiating table. Specifically, it prevents the Yankees from having to dive further into their top-15 prospects.

There’s very little reason to question Montas’ ability as a No.2 starter. Since Aug. 1 last season, the talented righty boasts the seventh-lowest ERA (2.76) among starters. It’s not simply a result of making half his starts in a pitcher-friendly ballpark. During that same stretch, Montas ranks 13th in batting average allowed (.217) and he ranks 17th in WHIP (1.10). Even if he is only under contract through 2023, the presence of Volpe and the Yankees’ World Series drought makes this a worthy gamble.

Frankie Montas heads to Yankee Stadium for a prospect package

The Athletics should want the best prospect New York is willing to offer. However, small-budget clubs do tend to prefer a package of prospects. While it comes with more risk, there’s the upside in rolling the dice on multiple players and hoping one of them blossoms into something special.

It’s certainly something Cashman would be willing to do. New York’s history of identifying and developing talent proves it should have very little concern about losing a few of its non-elite talent in the farm system, especially if it lands Montas.

Ken Waldichuk likely slides into the Athletics’ rotation next season, providing them with a starter who is under team control for six seasons. Meanwhile, Roderick Arias is a long-term wildcat worth betting on and there’s a higher chance of him emerging as a top prospect based on the Yankees’ international scouting history.

While this deal might significantly drain the Yankees of some of their top-12 prospects, it keeps Volpe, Peraza, Jasson Dominguez and Alexander Vargas in the organization.

A majority of the fan base wants to keep Jasson Dominguez and the reasoning is understandable. He received generational hype as an international free agent, drawing comparisons to Mike Trout and Bo Jackson. While he is playing well this season, the reality is that he isn’t close to prospect pedigree.

The 5-foot-11 outfielder is still a significant work in progress at the plate, with plenty of swing-and-miss to his game. He also isn’t nearly as advanced as first portrayed to fans, likely years away from even having an opportunity to make his MLB debut. There’s a far greater chance he never makes an All-Star Game than him becoming a star.

New York needs to be in win-now mode and if trading its No. 3 prospect means upgrading the playoff rotation, that’s a cost that is justified. The odds are strongly in favor of the Yankees winning this trade with very limited risk that Oakland comes out on top. With that said, the Athletics are one of the few teams who should be willing to take dart throws on players like Dominguez and Deivi Garcia.