New York needs an upgrade in the outfield. The 28-year-old Benintendi would provide that in a big way.

It’s now come to fruition. According to multiple media reports, New York has acquired Benintendi from the Royals for three pitching prospects. Joel Sherman of the NY Post notes that T.J. Sikkema, Chandler Champlain and Beck Way are headed back to Kansas City.

Per MLB.com, Sikkema was the Yankees’ 19th-ranked prospect. Way came in at 21 in the preseason rankings while Champlain wasn’t ranked within the top 30. That’s a darn cheap price for the Yankees to pay.

From Kansas City’s perspective, it moves off a player in Benintendi who was slated to hit free agency this winter and was unlikely to return.

Of the trio these Royals acquired, Way and Sikkema are the closest to the majors. Way is pitching in high Single-A ball. Sikkema was a first-round pick in the 2019 MLB Draft and is also pitching at Hudson Valley. He’s posted a 2.48 ERA and 0.83 WHIP with 54 strikeouts in 36.1 innings. Champlain was a ninth-round pick last year and is pitching in Single-A Tampa. 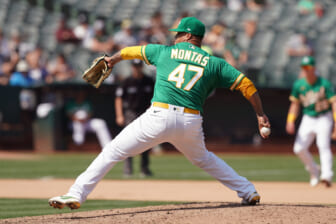 Also Read:
Frankie Montas trade to the New York Yankees: How it might look

Benintendi will now be inserted near the top of the Yankees’ lineup a he looks to continue what has been an exceptional season for the former Boston Red Sox prospect.

As for what this means moving forward, New York’s ability to acquire Benintendi will not change the dynamics when it comes to other moves the team might make in the next week. It is said to be in on stars Juan Soto and Luis Castillo.

With that said, this move might not come without complications. Andrew Benintendi remains unvaccinated from COVID-19. He was unable to make the trip to Toronto earlier in the season due to said status and Canada’s pandemic mandate. The Blue Jays find themselves at 54-43 and clearly in the playoff race. They are set to host New York for a three-game set in late September.