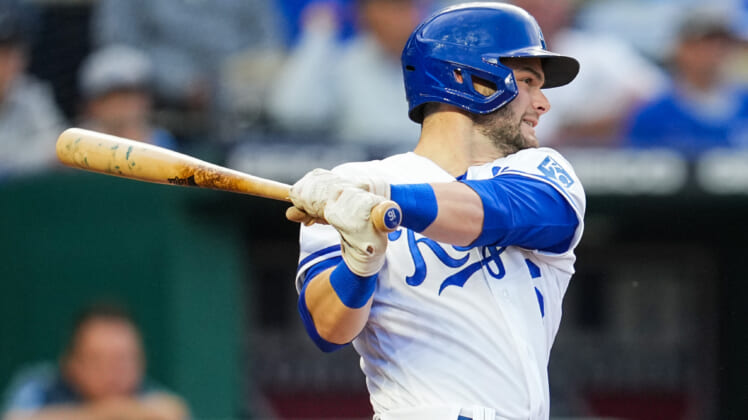 Like in most years, the New York Yankees are approaching another trade deadline as buyers. But when you’re the best team in baseball, it only makes sense to try and make up for any possible weaknesses on the roster.

After all, the Yankees haven’t won the World Series since 2009, which feels like a long drought when you’re expected to compete for a championship each year as one of the biggest budget ballclubs in baseball.

While they’re still on pace to win over 100 games this season, by losing seven of their past 11 matchups, the Yankees may feel more inclined to make a move sooner than later.

One of the players they’ve been linked to is Kansas City Royals outfielder Andrew Benintendi, who recently made the All-Star game for the first time in his seven-year career. Only as of late, the Yankees have emerged as “serious contenders” for Benintendi according to Mark Feinsand of MLB Network.

With Benintendi, 28, in the final year of his contract with the Royals, it makes much more sense for the Royals to trade him ahead of the August 2 trade deadline. As Feinsand mentions, if the Yankees are truly serious contenders for the outfielder, a deal could be struck any day now. Let’s look at how he’d fit into the Bronx Bombers’ lineup.

One of the main reasons why the New York Yankees are digging around the trade market is due to the ineffectiveness of Joey Gallo this season, as he’s currently hitting just .164. While he’s never been very good at getting on base, it’s a big contrast when compared to Benintendi, whose slugging percentage is even higher than Gallo’s despite only having three home runs on the year.

Adding Benintendi to the mix can help bring stability to an otherwise stellar outfield. He won’t add more power, but with Aaron Judge and Giancarlo Stanton, they don’t need another baseball masher. Instead having another table-setter can help put more ducks on the pond when the big bats come up to the plate. It’s a much better alternative than having Gallo strikeout 37.7% of the time.

Not that it matters much to the Yankees, but Benintendi’s signed to a one-year, $8.5 million contract right now. Acquiring Benintendi now gives the Yankees a short-term rental, but if he maintains his current pace, the former Beantown rival could find a long-term home in New York.