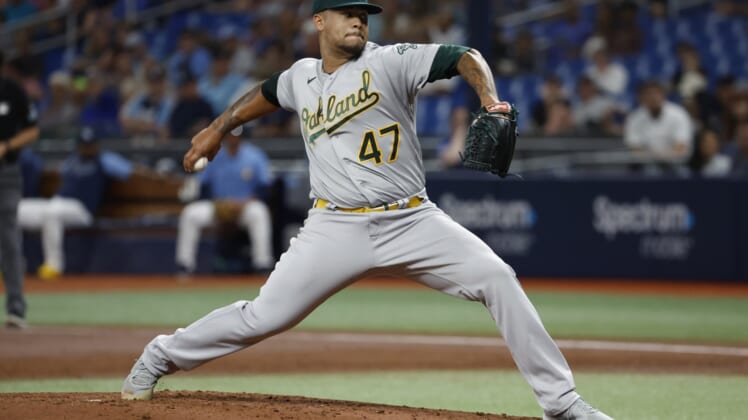 Staff ace Frankie Montas will be one of the few faces that fans figure to recognize when the Oakland Athletics play their home opener Monday night to start a four-game series against the Baltimore Orioles.

Widely expected to be one of the worst teams in the American League this season after trading Chris Bassitt, Sean Manaea, Matt Chapman, Matt Olson and Mark Canha, the A’s held their own on a season-opening, 10-game Eastern swing by going 5-5.

The trip included three wins in four games at Tampa Bay, which was sandwiched by competitive 2-1 series losses at Philadelphia and Toronto.

The right-hander has faced Baltimore just once in his career, earning the win after allowing three hits and three runs in six innings in 2019.

The clubs are meeting in Oakland for the first time since that series. The A’s took two of three at Baltimore last year.

Among the A’s who will play in front of their new fans in the home opener will be center fielder Cristian Pache, acquired from Atlanta in the Olson trade.

Pache scored one of Oakland’s three runs in a 4-3 trip-ending loss at Toronto on Sunday, one day after his two-run home run in the ninth inning broke a 5-5 tie and sent the A’s to a 7-5 victory.

The 23-year-old had hits in six of his nine starts on the trip, including a single that was booted in the Tampa Bay outfield Thursday, resulting in a “Little League home run.”

“As I was going, the dugout was going crazy, so I knew something must have happened,” said Kevin Smith, who was on first base when the ball was hit and scored in front of Pache. “When I turned around … I saw Pache was hauling it. It was just fun to tell him to come on home. That was awesome.”

The Orioles were riding high on their cross-country trip Sunday night after completing a 2-1 series win over the New York Yankees with a 5-0 victory.

Pinch-hitter Rougned Odor had the key hit in a five-run eighth inning in the series finale, driving in the game’s first two runs with a single.

“Every win is emotional for everybody,” Odor, a former Texas Ranger, gushed after getting introduced to the Orioles-Yankees rivalry. “It’s not because I played against the Yankees. It’s just because we won the game.”

Unlike most Orioles, Odor is plenty familiar with the A’s, having been a longtime American League West rival during his seven years with the Rangers. He has 13 career homers against Oakland, including one off Montas in a 2020 meeting in Texas.

Odor has gone 5-for-13 against Montas, with two doubles, the one homer and five RBIs.

The Orioles will begin a 10-game trip with right-hander Spenser Watkins (0-0, 3.00) on the mound. He was pulled after three innings in his season debut against the Milwaukee Brewers, a game the Orioles lost 5-4 on Tuesday.

The 29-year-old not only has never faced the A’s, but he has never gone head-to-head with any current member of the team.