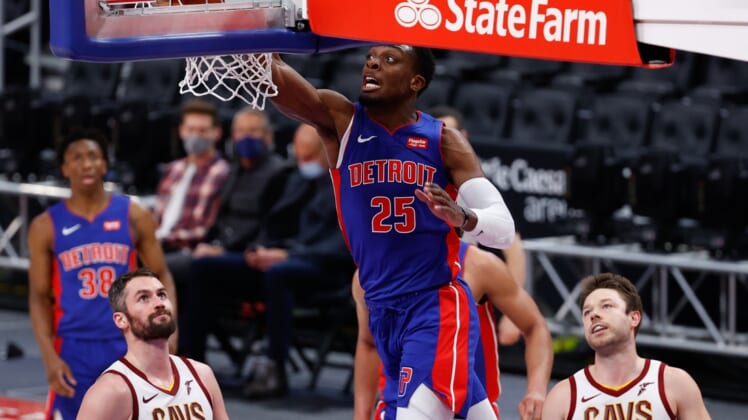 Frank Jackson scored 20 points, including the go-ahead basket in the final minute, and the Detroit Pistons edged the visiting Cleveland Cavaliers 109-105 on Monday.

During a 14-0 Pistons first-quarter run, Bey knocked down four consecutive triples in the span of 1:27 to give his team a 32-9 lead.

Detroit carried a 62-53 lead into the second half.

Cleveland cut the Pistons advantage to five, 62-57, two minutes into the third quarter on a Love basket.

A Taurean Prince 3-pointer late in the quarter pulled the Cavs within two points. Frank Jackson then went on a personal 6-0 run, including a layup as the third quarter buzzer sounded, to give Detroit an 84-76 lead entering the fourth.

Cleveland opened the fourth with a 7-0 spurt, capped by a Hartenstein basket, to slice Detroit’s lead to one.

Garland drained a 3-pointer with 6:19 remaining to give the Cavs their first lead at 92-90.

Sexton knocked down a 3 with four minutes left for a three-point Cleveland advantage. Stewart dunked off a Hayes lob to put Detroit back on top 100-99.

Stewart scored in the lane, but Garland answered with a runner to tie it at 103-all.

Frank Jackson scored along the baseline and Josh Jackson made a layup to give Detroit a four-point lead with 16.5 seconds left.