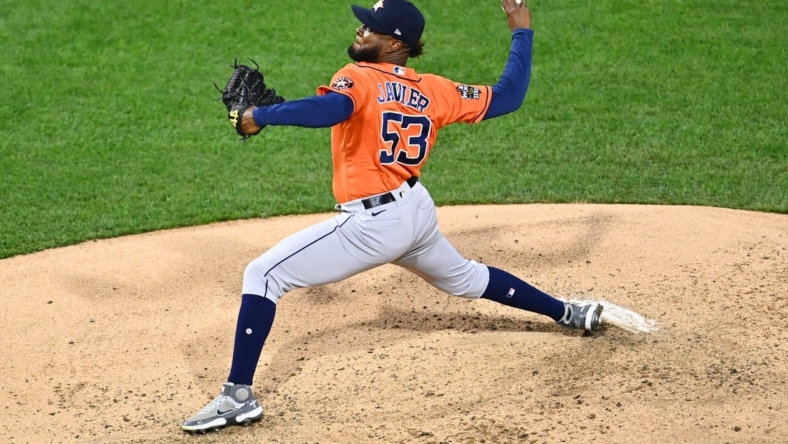 PHILADELPHIA — Cristian Javier and three Houston relievers combined on the third no-hitter in postseason history, leading the Astros to a 5-0 win over the Philadelphia Phillies in Game 4 on Wednesday.

Javier (2-0) struck out nine and walked two in six innings. He threw 97 pitches, 63 for strikes. Bryan Abreu struck out the side in the seventh inning, and Rafael Montero fanned one in a 1-2-3 eighth.

In the ninth, Houston closer Ryan Pressly struck out leadoff batter Brandon Marsh swinging. Kyle Schwarber walked to end a streak of 18 consecutive Philadelphia batters retired. Rhys Hoskins flied out to right, and J.T. Realmuto grounded out to third baseman Alex Bregman, who threw to first baseman Yuli Gurriel for the final out.

The only previous World Series no-hitter was a perfect game by the New York Yankees’ Don Larsen against the Brooklyn Dodgers in Game 5 of the 1956 Fall Classic.

The other prior postseason no-hitter also was thrown in the same venue as Wednesday’s gem, Citizens Bank Park. The Phillies’ Roy Halladay no-hit the Cincinnati Reds in Game 1 of the 2010 National League Division Series. The Reds’ manager that day is the Astros’ current manager, Dusty Baker.

Houston scored all five of the game’s runs in the fifth inning. Yordan Alvarez was hit by a pitch with the bases loaded to score the first run. Bregman followed with a two-run double, Kyle Tucker hit a sacrifice fly and Gurriel added an RBI single.

Javier (seven innings), Hector Neris (one inning) and Pressly (one inning) also combined to no-hit the Yankees this year on June 25. The Phillies were no-hit on April 29 in a combined effort by five New York Mets pitchers.