There doesn’t seem to be any end to the darkness surrounding Aaron Hernandez.

The latest in a long line of dark deeds is an accusation by former Tennessee Titans cornerback Ryan Mouton, who claims the former New England Patriots tight end threatened his life after a big hit.

Mouton brought this to light in a “Throwback Thursday” post on Instagram, per Chris Yuscavage of Complex: 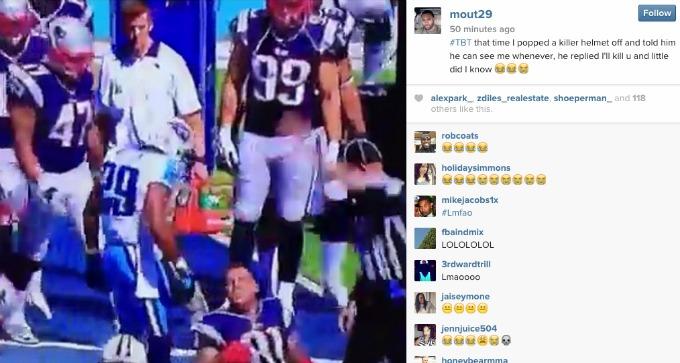 Mouton doesn’t hold any punches in his comment: : “#TBT that time I popped a killer helmet off and told him he can see me whenever, he replied I’ll kill u and little did I know.”

Here’s the YouTube video of the incident from September 9th, 2012 (WARNING: NSFW):

Hernandez was recently found guilty in the murder case of Odin Lloyd. He is also facing charges in a double homicide case from 2012.

While nobody would compare words exchanged in the heat of battle on the football field to criminal activities, Mouton’s Instagram post is another stark look into a troubled young man.