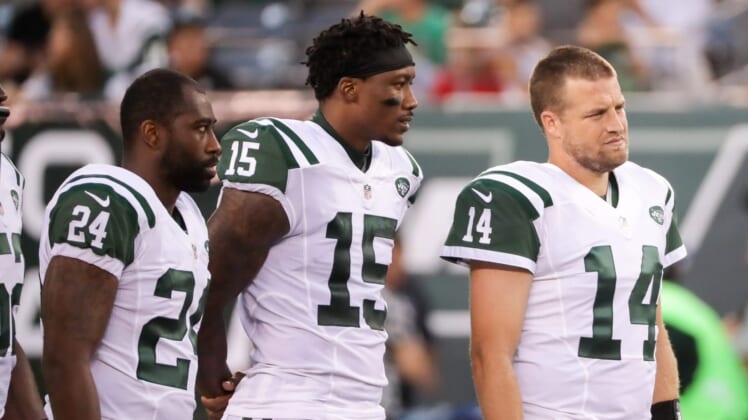 The New York Jets waived/injured former second-round receiver Devin Smith on Monday, but as of Tuesday morning he still hadn’t heard from the team.

Speaking with SB Nation’s Thomas George, Smith revealed that no Jets executive, coach or teammate had called him to let him know he’d been let go.

“I found out on Twitter,” Smith said. “All I can say is, it’s just weird,” he says of the lack of Jets communication.

Smith’s career has been filled with brutal torment. He suffered an ACL injury in his rookie campaign and has appeared in just 14 games, catching 10 passes for 135 yards and a touchdown. Then this offseason, he tore his ACL again, leading to the team’s decision to let him go.

If Smith goes unclaimed, then the Jets can still place him on injured reserve.

Still, to make a roster move like this and not even tell the player is just dirty pool by the Jets.

Despite the bad hand Smith has been dealt to this point in his career, he remains steadfast in his determination to make an impact in the NFL.

“I want all the fans out there who do care about me to keep doing that,” Smith said. “That helps push me every day. I appreciate it. They’re like family, people who aren’t giving up on me. They’ll help me come back stronger than ever. And for the Jets and all NFL teams, I’m still here. I’m busting my tail to get back. I’ll get my shot. I will be known.”

An extremely talented young man, Smith was a big-play specialist at Ohio State before entering the NFL. During four seasons with the Buckeyes, he caught 121 passes for 2,503 yards and 30 touchdowns, including 12 in his senior season.

We wish him nothing but the best as he recovers from the ACL injury. Whether it’s with the Jets or another team, no doubt he’ll get another chance to make an NFL roster in 2018.