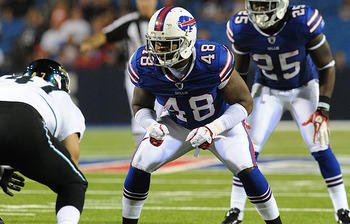 Former Buffalo Bills linebacker Robert Eddins, who played primarily on the team’s practice squad in 2011 and 2012, was found shot to death in his Detroit home Tuesday night.

According to authorities, Eddins and another man were found shot several times, at which point police concluded that whoever killed to two men tried to set the home on fire.

“The gas was on from the stove, somebody left on, the pilots were not lit, so it looks like it was an intentional act,” Captain Kurt Worboys of the Detroit Police Department said Tuesday evening, via a local ABC news affiliate.

It is most definitely a tragic situation. Eddins becomes just the latest former NFL player to be killed in a recent string of murders that includes Joe McKnight and Will Smith.

“They tried to blow the house up, they had the TV’s on, the whole house had gas, that’s why we can’t go in there. The whole house, they ransacked it,” the former Bills linebacker’s mother, Bridget Eddins, said.

Undrafted back in 2011, Eddins starred for Ball State in college, recording 17 sacks and 34 tackles for loss in four seasons with the Cardinals.