Florida State gets jump on Miami, wins going away 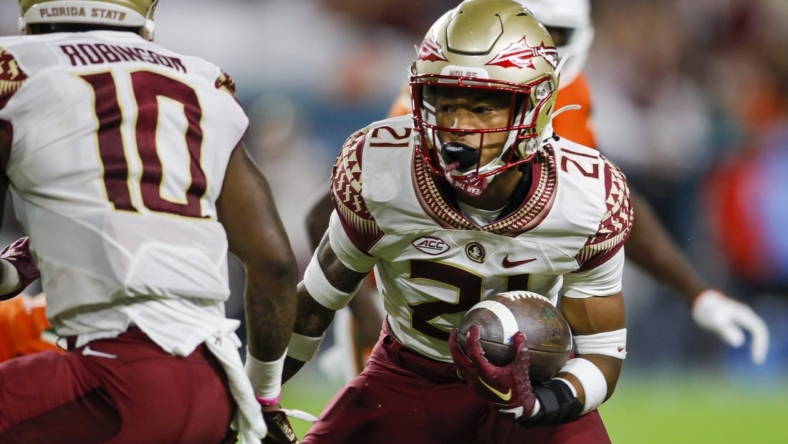 Trey Benson ran for 128 yards and two touchdowns, and Jordan Travis passed for 202 yards and three scores as the Florida State Seminoles routed the host Miami Hurricanes 45-3 in their ACC matchup on Saturday night.

Travis, who rested most of the fourth quarter, completed 10-of-12 passes. Benson averaged 8.5 yards per rush, breaking numerous tackles. He also caught one pass for 25 yards.

Hurricanes quarterback Tyler Van Dyke returned after a right-shoulder injury. However, with 14:01 left in the second quarter, Van Dyke threw an incomplete pass and grabbed his right shoulder in pain.

He was pulled for good shortly after that, finishing with 24 yards passing on 4-for-8 completions.

Miami (4-5, 2-3) also used Jacurri Brown and Jake Garcia at quarterback, but the Hurricanes have gone two straight games without a touchdown.

Florida State opened the scoring on its first drive. After looking like a three-and-out possession, the Seminoles got a break when Miam was called for pass interference on a third-down incompletion. Travis then hit Ontaria Wilson for a 56-yard touchdown.

Miami, on its first drive, cut the deficit to 7-3 on Andres Borregales’ 49-yard field goal.

Florida State made it 14-3 on its next possession. Miami again had the Seminoles stopped on a third-down incompletion, but an interference call on Tyrique Stevenson led to Travis’ 2-yard touchdown toss to DJ Lundy.

The Seminoles got another short field later in the second when Greedy Vance intercepted a Garcia pass at the Miami 7-yard line. That set up Benson for a 1-yard scoring run.

The Seminoles took a 31-3 lead on the last play of the first half — a 41-yard field goal Ryan Fitzgerald.

After a scoreless third quarter, Florida State extended its lead to 38-3 on Travis’ 8-yard touchdown pass to Camren McDonald with 14:55 left in the fourth, and the game was all but over at that point.