Freshman guard Zach Hodskins made his Florida Gators debut on Friday night against William & Mary. And there wasn’t a lot to the debut. He played two minutes, missed a shot and committed a foul without scoring a single point.

Normally, that wouldn’t be a college basketball debut to write home about.

But for Hodskins, it truly is something he will never forget. See, Hodskins was born without a left hand. 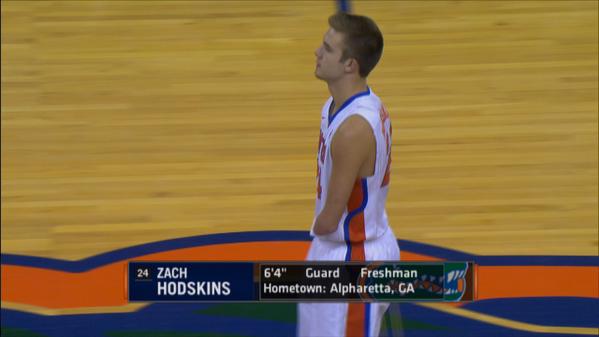 Hodskins, the 6’4″, 203-pound shooting guard from Alpharetta, Ga., is a walk-on and likely won’t play many important minutes this season. But don’t tell that to him…after all, he is used to proving skeptics wrong.

Despite this physical handicap, Hodskins averaged 11.8 points, shot 37 percent from the field as a senior in high school.

Prior to earning a spot on the team, Hodskins had this to say about his transformation from high school hoops star to attempting to make his name known for a Florida Gators team that was going to head into the season as one of the top-10 units in the nation (via GatorZone.com).

It wasn’t surreal until I actually got here and saw my name on my locker. That’s when it all hit me like a freight train…I know to some it may look and sound crazy, but I didn’t get here by accident. I worked as hard as I could and feel like I deserve this sort of opportunity. Now that I’m here, this is my new family and I love everything about it.

And he surely made his presence known Friday evening in Gainesville.

It might have been hard for Hodskins when he first set foot on campus at Florida. He would receive looks from other students on campus and even some of his eventual Gator’ teammates might have been taken aback by the obvious physical limitation.

But Gators head coach Billy Donovan wasn’t have any of it.

I get that people are interested and attracted to the story because of his limitations, and I get that he’s an inspiration to a lot of people, but I don’t want that for him here. I want him to feel like another player in our program — and I think he wants that, too. He’s not looking to be someone who is the face of overcoming obstacles. He’s a young kid who wants to be a normal kid and doesn’t want anyone to take it easy on him.

Every player works their tail off to reach the pinnacle of college basketball. But the reality is that Hodskins story is different. It had to be a grind for him, even more so than his teammates, but the ability to overcome obstacles in life is what makes each of us stronger. Some of those obstacles are bigger than others. Some are smaller.

The interesting thing about Hodskins story is that he wasn’t asking for handouts. He accepted a walk-on role at Florida after a ton of schools around the country showed interest in him. He did so with the understanding that he would be competing with four others to earn just one non-scholarship roster spot remaining on the team.

His story may be rare, but his high school video goes to show us just how talented he is.

As Hodskins matures as a basketball player, it’s going to be interesting to see if he gets some real playing time for the Gators this year and into the future. He’s the type of guy you want to root for.