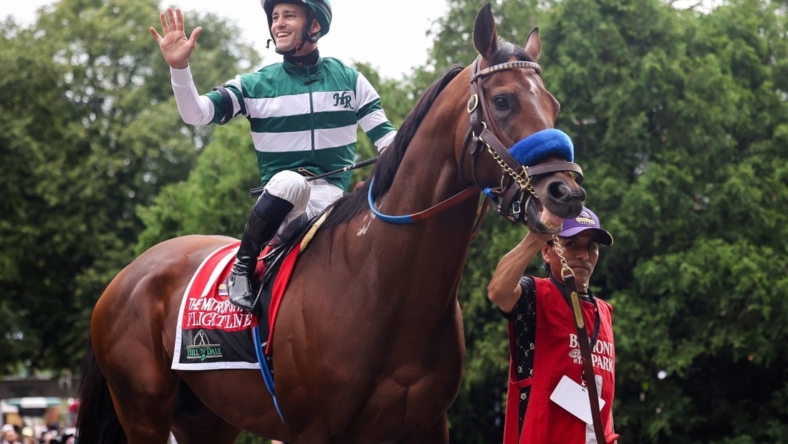 There will be no lack of drama in this year’s $6 million Breeders’ Cup Classic despite the fact that Flightline, the prohibitive favorite in the race to decide the year’s best horse, looks all but unbeatable.

Flightline, an undefeated 4-year old colt, is the 3-5 choice to win the Classic on Saturday afternoon. The Classic will be the final and most prestigious of the 14 championship races at the 39th Breeders’ Cup that will be conducted over two days at Keeneland Race Course in Lexington, Ky.

Trained by John Sadler, Flightline has raced five times and won them all, most recently a 19 1/4-length victory in the Pacific Classic on Sept. 3 at Del Mar Racetrack near San Diego. It was Flightline’s first race around two turns and at 1 1/4 miles, the distance of the Classic. He immediately was elevated to the head of the class.

Flightline’s five wins have been by a combined total of 62 3/4 lengths.

Flavien Prat, who has been aboard Flightline for all five of his races and will be in the saddle again on Saturday, said at no point did his horse ever feel tired while dominating the Pacific Classic. It was a performance for which Flightline drew comparisons to Secretariat’s legendary win in the 1973 Belmont Stakes.

“There are horses you can tell when you pull up they gave you everything,” Prat said. “I never had that feeling. Hopefully, I’ll never have it. (Flightline) has such a high cruising speed it feels like you could go twice around and he’ll never get tired.”

The Classic could well be a coronation for Flightline, but seven horses will join him in the gate to make him earn that crown.

Leading the pack are fellow 4-year-olds Life Is Good, winner of nine of his 11 races, including last year’s Breeders’ Cup Dirt Mile and, most recently, the Grade 1 Woodward Stakes; Olympiad, who has won six of his past seven, including the Grade 1 Jockey Club Gold Cup; and Hot Rod Charlie, winner of the Grade 2 Lukas Classic in his last out and the fourth-place finisher in last year’s Classic.

“Terrific field,” Sadler said Monday. “Not a bad horse in there. I have a lot of respect for Life Is Good, having watched him run in California. I enjoyed watching Epicenter. I’ve seen them all run a lot. I know they’re really good.”