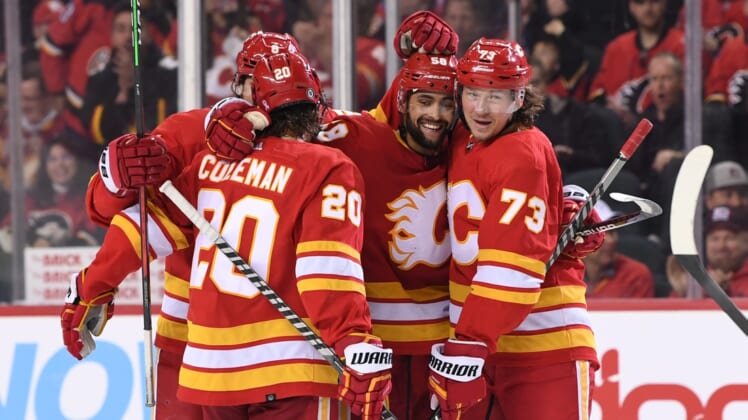 The game should give the Flames a test to see where they stand in the race for the Cup with just over seven weeks remaining in the regular season. Calgary is 16-3-1 in its past 20 games, but two of the regulation defeats and the overtime loss have come in the past seven games. That includes a 5-4 home loss to the Washington Capitals on Tuesday, a game that saw them blow a two-goal first-period lead and cough up three straight goals in the third period after leading 3-2.

Elias Lindholm scored twice for the Flames. The first one put them ahead 1-0 in the first period, but the second came in the final minute and left Calgary one goal short after Washington scored three unanswered goals.

“Obviously when you’re not getting wins it’s disappointing, but at the same time we have to regroup here and get a win on Thursday,” defenseman Oliver Kylington said.

“I thought we hung around,” Calgary head coach Darryl Sutter said. “We needed a couple saves, needed to bury a couple chances, those Grade-A (scoring opportunities) we had, try and get a two-goal cushion at some point. But their depth showed up. It was stronger than ours.”

The Lightning come to town after a 7-4 loss to the Winnipeg Jets on Tuesday in the second of a six-game road trip. Tampa Bay gave up four third-period goals, one shorthanded and two into an empty net, after the game was tied 3-3 heading into the final 20 minutes.

“If you look at pretty much every one of their goals tonight it was from two, three feet right in front of (the net),” Tampa Bay defenseman Ryan McDonagh said. “It was not good enough, not strong enough in front, and that’s where the goals are scored. We certainly didn’t play hard enough defensively around the blue paint, and we paid the price.”

Despite the defeat, Tampa Bay is 7-2-0 since Feb. 11 and 14-4-1 going back to Jan. 11, five days after they defeated the Flames 4-1 at Amalie Arena. That was Nikita Kucherov’s return from a 32-game absence because of a lower-body injury, and he contributed two assists.

Kucherov, who played in just three games before the injury, has scored 10 goals, one of nine Tampa Bay players in double figures. Steven Stamkos leads the Lightning with 63 points (27 goals); he’s 14th in the NHL scoring race.

The Flames have two players ahead of Stamkos. Matthew Tkachuk was tied for 10th heading into play Wednesday with 65 points (27 goals), and Johnny Gaudreau was fifth with 74 points (23 goals). Gaudreau is one of four players with at least 50 assists.