Five NFL games we’re most excited for in 2020 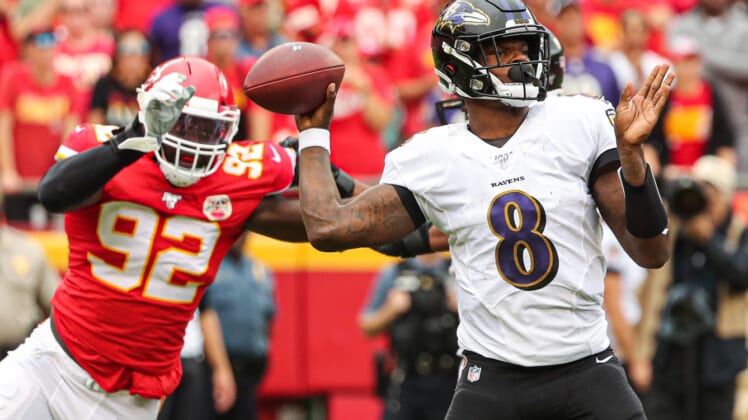 The 2020 NFL schedule is out and excitement is already building for the upcoming football season. While we’re still a few months away from football, Thursday’s schedule release offered a glimpse of the games we’re most excited for in 2020.

There is plenty of intrigue for the upcoming season with Tom Brady leaving the New England Patriots to join the Tampa Bay Buccaneers and even more shakeup throughout the NFL. We’re especially excited for the NFC, which is loaded with talented teams throughout the conference between playoff contenders and potential surprise teams.

Of course, the AFC will deliver plenty of fun in 2020 boasting the past two NFL MVP award winners along with plenty of exciting, young quarterbacks looking to take their game to the next level.

Now that the 2020 schedule is official, here are the five NFL games we’re most excited for in 2020.

How could anyone not get excited for Patrick Mahomes vs. Lamar Jackson? Both quarterbacks bring their own version of unique excitement to the field and when they clash on Monday Night Football in Week 3, fans will always get to watch one of the NFL’s most electrifying players. Of course, this game will mean even more to these teams.

The Chiefs and the Ravens are the AFC’s best teams in 2020. Both come in near the top of our projected standings and grabbing the No. 1 seed will be even more crucial this year with the NFL’s new playoff format. Given how much better these teams are compared to their other conference foes, a first-round bye could easily be decided by this matchup. Given the importance an additional week of rest could have, this game could help deterimine Super Bowl LV.

Tom Brady facing off against Drew Brees in the Mercedes-Benz Superdome, it doesn’t get better than that. A clash between two of the greatest players in NFL history in an iconic stadium that would be rocking with fans unleashing boos on Brady and the Buccaneers.

The fact that we get this game twice during the regular season is spectacular. Both teams have Super Bowl aspirations in 2020 and they’ll each be fighting to put another ring on their quarterback’s finger. While both defenses might be underrated, this clash would come down to the final minutes in a shootout. We get to Brady vs. Brees in the very first week of the NFL season, it doesn’t get better than that.

An inter-division rivalry as old as time with a storied history thanks to some of the NFL’s greatest dynasties. It’s been a few years since the 49ers and Cowboys were both among the NFC’s top teams in the same year, which has taken some of the shine off this battle. However, things will be different in 2020 as both clubs are set to achieve greatness.

The 49ers will come in as the favorite to win, an expectation they have earned given their supremacy in 2019. However, the Cowboys boast one of the NFL’s best offenses and the addition of Mike McCarthy should solve some of this team’s old woes. A battle in Week 15 is the perfect litmus test to see how these teams stack up and it could even be an early NFC Championship Game preview.

The Packers and Eagles provided a wild Thursday Night Football game in 2019 and they’ve also got a great track record of delivering thrilling finishes. Coincidentally, this is also a matchup of two teams that made questionable decisions to take quarterbacks early in the 2020 NFL Draft. Of course, the focus in Week 13 will be on Aaron Rodgers and Carson Wentz.

If recent history is any indicator, both teams will put up a lot of points and we’ll see plenty of big plays. Wentz and Rodgers will deliver a few jaw-dropping throws, while running backs Aaron Jones and Miles Sanders will keep outdoing each other with incredible runs. Ultimately, this game will likely come down to the final drive and a chance to win the game in the last seconds. Oh and this game will come late in the season when playoff spots will be on the line.

Seeing a new stadium being unveiled is always a treat and even more so when it happens in Las Vegas. The Raiders are beginning a new, exciting era in one of the country’s best cities and we’re expecting quite the show in Week 2. The fact that it will be a primetime game against the Saints makes this even better.

Don’t sleep on the matchup either. The Saints aren’t exactly road warriors and the Raiders can have an edge to them when facing top teams. This team will want to put on a grand show in front of the home crowd and a national audience on Monday Night Football, we expect to see just that. A high-scoring battle with thrilling highlights all in the heart of Las Vegas, a perfect treat early in the 2020 NFL season.