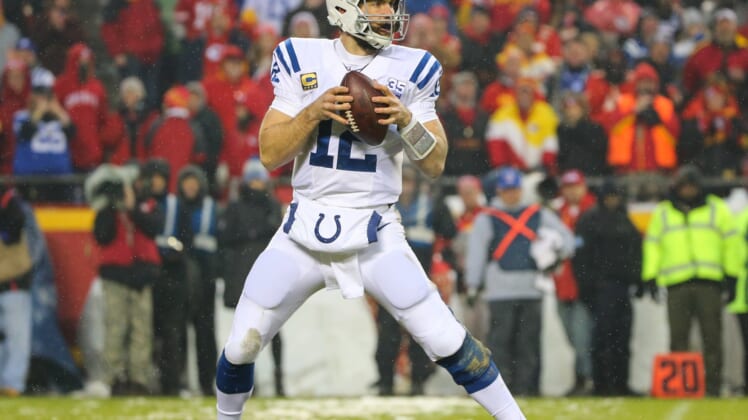 Like most of us, the Indianapolis Colts were shocked to learn that quarterback Andrew Luck is retiring. Indy has exhausted a ton of resources on Luck, building the team around him in the process

There is, however, some decent news on this front. The Colts have pushed back against trading contract-year player, quarterback Jacoby Brissett. He’ll now start come Week 1.

This also leads to some major questions. Given that Brissett was not effective in Luck’s stead two seasons ago and is slated to become a free agent in March, there’s a chance he’s not the long-term answer in Indianapolis.

It’s in this that we look at five options at quarterback for the Colts as they navigate through the post-Luck era.

This actually makes the most sense. Should Brissett struggle during the early part of the 2019 season, Indianapolis might want to call the New York Giants up about this two-time Super Bowl winner. While Manning is set to be under center Week 1, he’s been pushed big time by rookie No. 6 overall pick Daniel Jones.

Manning does not have a future in New Jersey beyond the 2019 season. His family also has a relationship with the Colts dating back to the Peyton Manning days. Manning could come in and be a stopgap option as the Colts look to the 2020 NFL Draft for a franchise cornerstone.

Unless things go horribly wrong for the Colts in 2019, they are extremely unlikely to be in position to land likely No. 1 overall pick Tua Tagovailoa. We’re also not sure that he fits what Frank Reich has built on offense in Indianapolis.

The same thing can’t be said about this Oregon standout. A likely top-10 pick, Herbert would have gone in the first round had he declared for the 2019 NFL Draft. At 6-foot-6, Herbert is a prototypical dropback quarterback of Luck’s ilk. He’s also a brainiac, something that endeared the Colts to Mr. Luck when they drafted him No. 1 overall back in 2012.

Despite showing interest in returning to the NFL, Kaepernick has not received much interest after settling a lawsuit with the NFL. Some figured the former Super Bowl quarterback would have been given a chance. It just has not come to fruition.

In Kaepernick, the Colts would get a more talented version of Jacoby Brissett. He could sit on the sideline and learn Reich’s system for a few weeks before ultimately taking over. There would certainly be push back in a more conservative state like Indiana. But winning cures all ills. Kaepernick has that track record.

Here’s an under-the-radar option for Indianapolis. Mullens surprised a lot of people after taking over for an ineffective C.J. Beathard as the San Francisco 49ers’ starting quarterback last season. The former undrafted rookie free agent completed 64 percent of his passes for 2,277 yards with 13 touchdowns and 10 interceptions in eight starts.

Mullens would be an upgrade over Brissett. He’s also just 24 years old, leading to the possibility of the Southern Mississippi product being a long-term option in Indy. A move for Mullens would likely require nothing more than a mid-round pick, too.

Yet another likely first-round pick next April, Fromm checks all the boxes for a potential franchise quarterback. The Georgia star is coming off a brilliant 2018 campaign, having put up 30 touchdowns compared to six interceptions while completing north of 67 percent of his passes.

At 6-foot-2, Fromm has the size to deliver from the pocket. He’s also surprisingly athletic and is among the most accurate quarterbacks in the college game. That’s something the Colts need from a quarterback in Reich’s system. He would also likely be available outside of the top 10 come April.