Despite many teams around the NFL now having gloriously impressive-looking new venues to base their operations on Sundays, the Bills have been playing at the same stadium since 1973. What is known as Highmark Stadium in Orchard Park, New York is not a mess of a facility like what the Oakland A’s play in, but it is still not anywhere near the standard of other organizations’ home arenas.

However, that is all set to change in 2026 after the organization and the state agreed to the framework of a construction deal in March. The $1.4 billion stadium includes a record $850 million of public funding. The $850 million in tax dollars will be split between the state of New York ($600 million) and Erie County ($250) where the new venue will be located — right across from Highmark.

Now, Bills fans can feast their eyes on the arena where superstar Josh Allen and the team will be playing for the next few decades.

The first images of the new stadium were officially released on Thursday (which you can see above), and the venue looks like a state-of-the-art facility to rival that of the Rams and Chargers home in Los Angeles, So-Fi Stadium.

On Thursday morning, executive vice president of Pegula Sports and Entertainment, Ron Raccuia, appeared on local radio station WGR 550 and gave some extra details about what the new stadium and the surrounding areas will include. 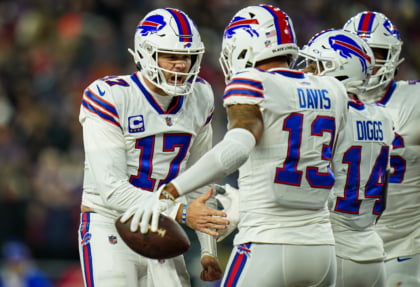 A key facet of the architecture will be to help limit swirling winds inside the stadium. The arena will have a perforated multi-dimensional exterior skin that creates wind confusion to stop swirling gusts from reaching the field. There will also be a canopy that covers 65% of the seats in the building.

The Bills return to action on Sunday, after a bye in Week 7, and will face the Green Bay Packers on “Sunday Night Football.”