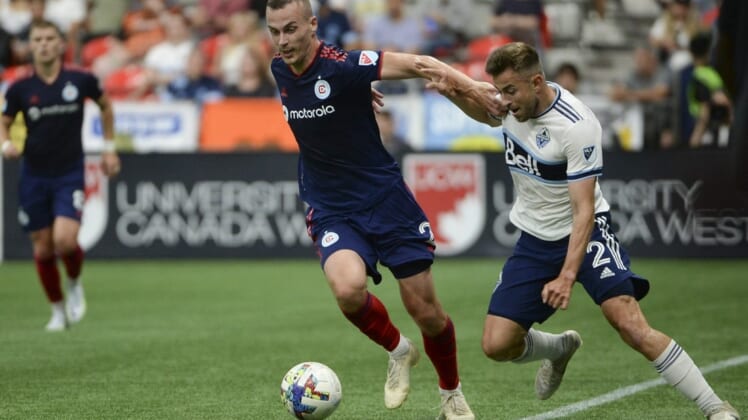 Rafael Czichos scored on a header in the 76th minute as the visiting Chicago Fire extended their winning streak to three games with a 3-1 victory Saturday over the Vancouver Whitecaps.

Xherdan Shaqiri scored a first-half goal for the Fire (7-10-5, 26 points), who have earned points in three-consecutive games for the first time since a five-game run to open the season. Chris Mueller sealed the victory for Chicago with a goal in the 90th minute.

Lucas Cavallini scored early in the second half for the Whitecaps, who lost for just the second time in their last seven games. Vancouver fell in the debut of defender Julian Gressel, who was acquired in a trade with D.C. United last week.

The Whitecaps (7-10-5, 26 points) will try to rebound from the defeat in just three days as they face Toronto FC in the Canadian Championship Final.

Vancouver goalkeeper Isaac Boehmer made one save, while Chicago goalkeeper Gabriel Slonina made two saves.

The Fire took a 1-0 lead in the 13th minute when Shaqiri scored his team-leading fourth goal of the season. Chicago’s Frederico Navarro stole a Whitecaps inbound pass and found Shaqiri for the goal on a bending shot inside the right post from outside of the penalty area.

The Whitecaps nearly tied it just before halftime, but a point-blank shot from Cavallini was saved by Slonina.

Cavallini was able to deliver his goal for the Whitecaps in the 54th minute to tie the game 1-1. Cavallini took a left-footed pass from Ryan Gauld and flicked a shot past Slonina with his left foot.

The Fire took the lead in the 76th minute. Mueller won a challenge on the left-side of the Whitecaps’ penalty area and sent a centering pass to Czichos, who headed the ball past a pair of Vancouver defenders.

Mueller scored for himself in the 90th minute to put the game out of reach and give the Fire just their second road victory in 11 tries. The goal was Mueller’s third of the season.