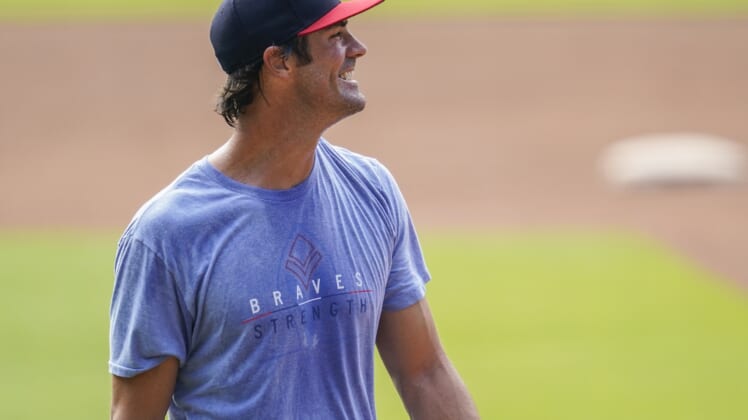 While the majority of the premier MLB free agents are off the board, there are still plenty of proven commodities available who can make an impact for a big-league club. Here are landing spots for the five best remaining MLB free agents.

The Brewers recently re-signed Brett Anderson. Meanwhile, Brandon Woodruff is a stud, and Corbin Burnes was splendid in the nine outings he made last season. With that said, the Brewers have struggled to field a reliable starting rotation in recent years. They could use Hamels.

Albeit the 37-year-old made just one start last season due to injuries, he’s a resourceful and proven starter. Hamels gets hitters to bite on his off-speed pitches and works out of trouble by sticking to his tendencies. The left-hander posted a 3.81 ERA and 143 strikeouts across the 27 starts he made in 2019 with the Chicago Cubs.

The Brewers would also be signing up for the postseason experience that Hamels brings to the table (he has 16 career postseason starts under his belt). He’d be a plausible way for them to round out manager Craig Counsell’s rotation.

A lack of bullpen reliability has been one of the more pressing issues for the Phillies in recent memory under both their current and former skipper (Joe Girardi and Gabe Kapler). Roberto Osuna would be a tremendous get for that aspect of their roster.

The right-handed reliever is lights-out in the late innings. Across his last three seasons, which account for 108 appearances in time with the Houston Astros and Toronto Blue Jays, Osuna posted a combined 2.52 ERA, 0.90 WHIP and 108 strikeouts. Osuna finds success primarily with his high 90s fastball and has been one of the best backend relievers in MLB over his six-year career.

He would give the Phillies a comforting presence in the ninth inning, presumably moving Hector Neris to a setup role. Another option is the Phillies beginning the regular season with Osuna in a setup role and having him work his way into the closing gig. He gives them options. But there is risk, given he’s chosen to pitch through a partially torn UCL.

Edwin Encarnacion, is largely a DH-only, given his age and offensive tendencies. That opportunity exists with the team he spent the 2020 season with, the Chicago White Sox.

Encarnacion is coming off a rough season. He finished with just 25 hits, 10 of which were home runs. Prior to 2020, he posted 32-plus home runs and a .810-plus OPS = for eight consecutive seasons. He’s capable of at least being a power threat which can serve as a complementary piece to a Chicago roster looking to make headway in the playoffs next season.

He’d be a one-year signing that keeps a power threat in an already vibrant offense spearheaded by 2020 American League MVP Jose Abreu and Tim Anderson. Encarnacion could also serve as Abreu’s backup at first base.

Even though Marcell Ozuna was retained, the Braves could use another outfielder. Josh Reddick would add a starting-caliber player to manager Brian Snitker’s outfield rotation.

Reddick is a tough out. He seldom strikes out, is a contact hitter and has a knack for staying in counts. Meanwhile, he’s a steady force in right field and has experience starting in both left and center field as recently as 2019. This well-rounded play bodes well for a versatile Braves outfield (Ozuna, Ronald Acuna Jr. and Ender Inciarte are accustomed to playing multiple outfield positions).

Reddick would likely be the Braves fourth outfielder behind Acuna, Ozuna and Inciarte. On the other hand, Reddick could potentially be the Braves’ Opening Day right fielder, moving Inciarte to a reserve role. Reddick gives the Braves flexibility.

The Indians’ bullpen lost its shining closer, Brad Hand, to free agency. Shane Greene would be their answer in the ninth inning.

Despite being arguably the second-best reliever to hit the open market this offseason, Greene remains a free agent, which is a plus for teams who need a reliever. Over the last two seasons, 93 appearances which came with the Atlanta Braves and Detroit Tigers, he has posted a combined 2.39 ERA and a 199 ERA+. The right-hander induces weak contact on a consistent basis thanks to his offerings effectively coming in all around the plate.

The Indians have a deep and young starting rotation. They need it to be accompanied by a well-oiled bullpen. Part of that comes from the lack of a proven closer, a void which Greene would fill. The likes of Greene, James Karinchak, Nick Wittgren and Oliver Perez give the Indians a reasonable chance at being one of the best bullpens in MLB. Bigger than that, they’d be finishing off what their rotation begins and therefore give the Indians a fighting chance of making the playoffs.