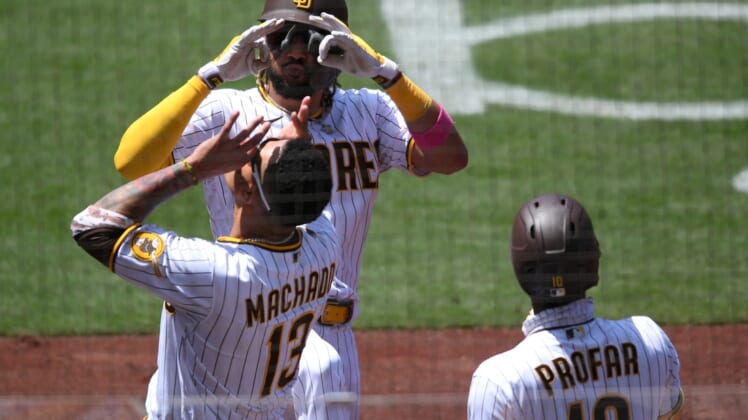 Tatis was 4-for-4 and homered in the fourth inning off Rockies starter Chi Chi Gonzalez to break up a scoreless tie in his return from COVID-19 protocol.

Tatis, who also homered in his first game back from the injured list earlier this season, had been sidelined since May 10. The opposite-field homer was his 10th in 27 games. He later doubled home the Padres’ third run.

Cronenworth’s homer was an inside-the-park sprint off Gonzalez in the sixth. His drive hit high off the wall and rebounded past Rockies right fielder Charlie Blackmon, rolling toward the infield. Blackmon was slow to retrieve the ball as Cronenworth circled the bases.

The victory was the Padres’ sixth consecutive and ninth in their last 10 games. The Rockies, who have lost five consecutive, fell to 2-17 on the road this season.

Musgrove (4-4), with relievers Craig Stammen and Mark Melancon, who earned his 15th save, combined on a two-hit shutout. It was the Padres’ sixth shutout of the season and second in three days against Colorado, which scored one run on 12 hits in the three games.

Musgrove had 11 strikeouts and did not issue a walk, facing two hitters off the minimum in his seven innings. Mark Melancon pitched a perfect ninth inning for his 15th save.

Musgrove, who threw the first no-hitter in Padres history on April 9 at Texas, retired the first eight hitters he faced (six by strikeout) before Gonzalez doubled to the warning track in center. Musgrove then retired the next 10 consecutive batters before Trevor Story singled to lead off the seventh.

Gonzalez (2-2) allowed two runs on four hits and a walk with six strikeouts in six innings.