Falcons’ Arthur Smith: ‘Not a disconnect’ between Mariota, Pitts 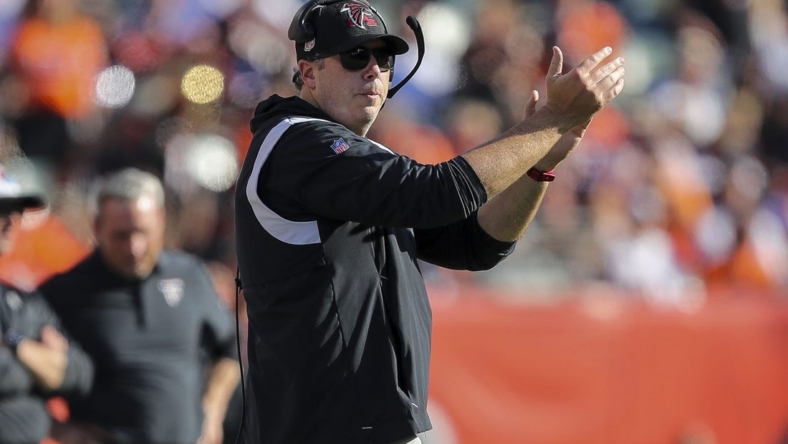 Behind every good offense, there is a good offensive line. And the Atlanta Falcons have been fortunate to have one of the league’s best units so far in the 2022 campaign.

But that unit took another hit Sunday when left guard Matt Hennessy injured his knee in the Falcons’ 20-17 loss to the Los Angeles Chargers.

Coach Arthur Smith said Hennessy “won’t be available this week” when the Falcons (4-5) hit the road to take on the Carolina Panthers (2-7) in an NFC South showdown Thursday night.

It was unfortunate luck for Hennessy after he made his first start of the season in place of starting left guard Elijah Wilkinson, who was put on injured reserve before the Los Angeles game.

Veteran Colby Gossett will be the likely starter at left guard against Carolina.

Despite the revolving door at left guard, Atlanta quarterback Marcus Mariota and tight end Kyle Pitts need to connect more in the passing game, especially on the deep ball.

Mariota and Pitts narrowly missed a 34-yard touchdown pass after a slight overthrow from Mariota. Smith thinks the duo will hit those deep tries in the coming weeks.

“There’s not a disconnect,” Smith said. “We’ve been pretty efficient in the red zone. We’ve hit some explosives down the field. Obviously, we’ve got to continue to work that with him and Kyle, which we will.”

Two weeks ago, Carolina started P.J. Walker at quarterback against the Falcons. But he was pulled in the Panthers’ 42-21 loss to Cincinnati in favor of Baker Mayfield.

Regardless of who starts under center for the Panthers, the Falcons will prepare accordingly in an important divisional game.

“If it’s Baker, we’ll see what he did yesterday,” Smith said. “We’ll see how they used him offensively. Or if it’s P.J., it’s what you’ve got to prepare for. They’ll have them ready to go. It’s a divisional game. We got to be ready to roll. It’s a huge opportunity for us Thursday night.”

–Tailback Tyler Allgeier had 10 carries for a career-high 99 yards against the Chargers. Smith said Allgeier has really progressed on third down, in pass protection and as a receiver, which can be a real challenge for rookies.

“He’s really, really intelligent,” Smith said. “All the different looks you get in the NFL, with the speed that you get, a lot of times for rookies it takes a minute to adapt. I think Tyler has certainly made a lot of improvements there … In the passing game, his awareness, understanding where to settle down in zones. He’s got what I call good spatial awareness.”

–Cordarrelle Patterson ran for 44 yards and two touchdowns in his return from an IR stay. He also caught one pass for nine yards. Due to the production of Allgeier and fellow rookie runner Caleb Huntley, Atlanta has the luxury of keeping its veteran running back fresh and play him in a variety of roles.

“I think it’ll be tough for Feleipe to make it for Thursday,” Smith said. “When you’re on these short weeks it’s not like you’re able to really crank up full speed tonight or tomorrow, right. … We’ll do the same thing with A.J., kind of assess him, see where he’s at, (as well as) Erik Harris.”

Smith said the Falcons did not plan to activate any players off injured reserve this week, “but that may change next week.”