People use social media for a multitude of purposes, which prompted Facebook to perform a study on the habits of NFL fans.

In a study called “sentiment analysis for sports,” the social media giant delved into which NFL fan bases were the most, and least optimistic about their teams during the 2015 preseason. Facebook data editor Robert D’Onofrio provided these details about the parameters of the NFL fan ranking study (via Kristian Dyer of Yahoo’s Shutdown Corner):

“The rankings reflect conversations among NFL fans on Facebook over the course of the preseason. We started the analysis shortly after the first summer training camp opened on July 22 and continued through September 7. The rankings are based on the posts and comments made during this time period by the nearly 50 million people who like an official NFL team page on Facebook.”

Upon conclusion of the Facebook study, it was determined that the Kansas City Chiefs possess the most hopeful and optimistic fans. At the other end of the spectrum, San Diego Chargers fans were most disparaged. 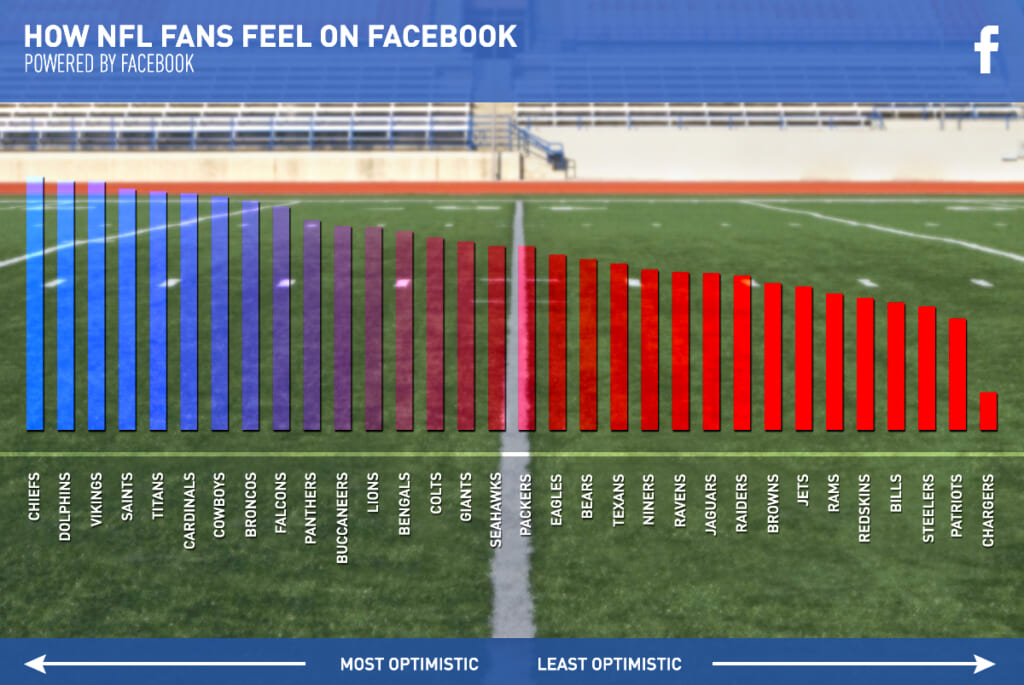 Here’s the order in which the study ranked all 32 NFL fan bases:

Incredibly, Browns fans still cling to a shred of hope after decades of misery.

Quite surprisingly, the New England Patriots fans ranked second last next to the Chargers for the least optimistic fans. Perhaps that can be chalked up to all the negativity surrounding “Deflategate” and NFL commissioner Roger Goodell, which certainly could have generated a bunch of derogatory postings involving the Patriots.

If you ever wondered whether anything you post on Facebook actually has any impact, this study certainly shows that people are into our business, and random posts count for much more than we realize.

As for those hopeful Chiefs fans, Kansas City hasn’t seen a Super Bowl since 1969. Could this finally be the year?