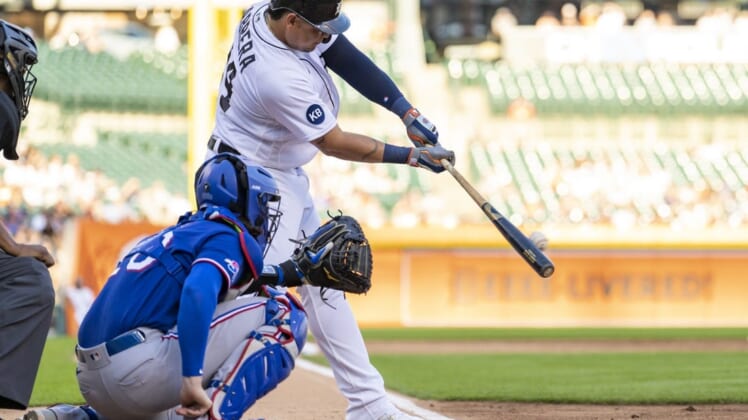 Ezequiel Duran hit a bases-clearing triple with two outs in the ninth as the visiting Texas Rangers rallied to defeat the slumping Detroit Tigers 3-1 on Thursday.

The Rangers won the opener of a four-game series despite being limited to four hits. The Tigers lost their fifth straight, all at home.

Corey Seager led off the Texas ninth against Gregory Soto (2-4) with a walk. One out later, Kole Calhoun was hit by a pitch. A strikeout put the Tigers one out away from victory. Nathaniel Lowe then drew a walk before Duran unloaded the bases with his extra-base hit down the right field line.

A stellar effort by Detroit starter Beau Brieske went to waste. The rookie lasted a career-high seven innings, giving up no runs, three hits and two walks while recording six strikeouts. He was nearly matched by Texas starter Martin Perez, who yielded one run on eight hits in seven innings.

Dennis Santana (3-2) pitched the eighth for the Rangers. Joe Barlow notched his 12th save pitch working around a walk in the bottom of the ninth.

The Tigers nearly got on the board in the third. Eric Haase led off the inning with a single. A groundout moved him up, and with two down, Miguel Cabrera smacked a single to right. Haase tried to score, but right fielder Adolis Garcia threw him out at the plate.

Texas’ Jonah Heim and Lowe had back-to-back singles to start off the fifth, but Brieske hung tough. A double play and a strikeout kept the deadlock intact.

Brieske walked two batters in the sixth but it didn’t come back to haunt him. Marcus Semien drew a one-out pass but was erased when he was picked off first. After Seager walked, Garcia fouled out.

Detroit finally broke through in the bottom of the sixth. Willi Castro led off with a single and Javier Baez smashed a one-out, ground-rule double to center. Robbie Grossman’s sacrifice fly to right knocked in Castro. Baez was left stranded at third when Jonathan Schoop flied out.

Brieske seemingly got stronger as the game wore on, striking out two batters in the seventh.