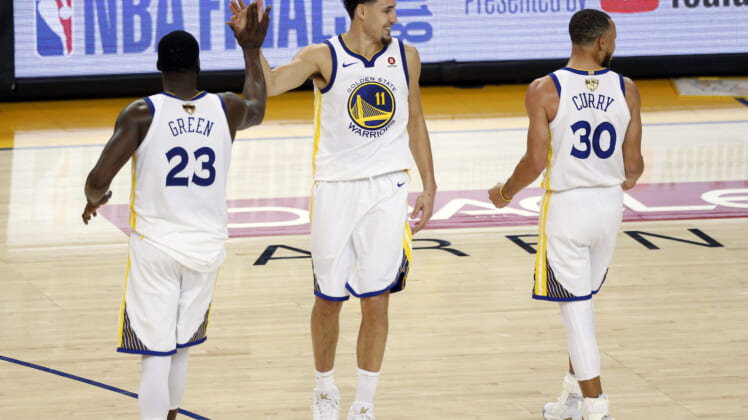 One NBA expert, and a former champion, believes the Golden State Warriors should seriously ponder breaking up their big three of Steph Curry, Klay Thompson, and Draymond Green if they don’t win an NBA title in 2022.

The Warriors are one of the favorites to make it to the NBA finals from the Western Conference. With Klay Thompson back and third-year player Jordan Poole becoming a major factor on the team, the Warriors are primed for a big finish to 2022. However, that is all speculation and far from a guarantee. Especially, if the Memphis Grizzlies have anything to say about it.

The Grizzlies and their young superstar Ja Morant showed in their 106-101 Game 2 victory that they are a serious threat to knock Golden State out of the playoffs. While there is a great deal of respect for the Warriors trio that helped won a title in 2015 and got to the finals the following year, all great things end. And that is the point of view of ESPN NBA analyst Kendrick Perkins.

The retired 14-year NBA veteran won a championship as a starter with the Boston Celtics and has been a part of three other squads that made it to the finals. He has seen dynasties come and go and was on one in Boston. During a recent appearance on ESPN’s “First Take,” he made the case that if the Warriors didn’t win a championship this season, the team should look to elevate Poole into the team’s “big three” and move Thompson out.

“But what I’m saying is, at some point, you have to move forward and start to [rebuild]. And you don’t want anything to get in the way of the growth of Jordan Poole,” he continued. “Because I believe that Jordan Poole is going to be special. With that being said, there’s only one basketball. At some point, every good thing has to come to an end, and if that means having to break up the big three that’s in Golden State, and that means having to move on from Klay Thompson then I think the Warriors should really consider that.”

Poole took a big step forward in 2021-2022 and finished as the team’s third-leading scorer last season. After seven games in these playoffs, he is averaging 22.3 points per game, which is second on the team behind Curry.

Thompson returned this season after missing the last two with a serious knee and Achilles injury.