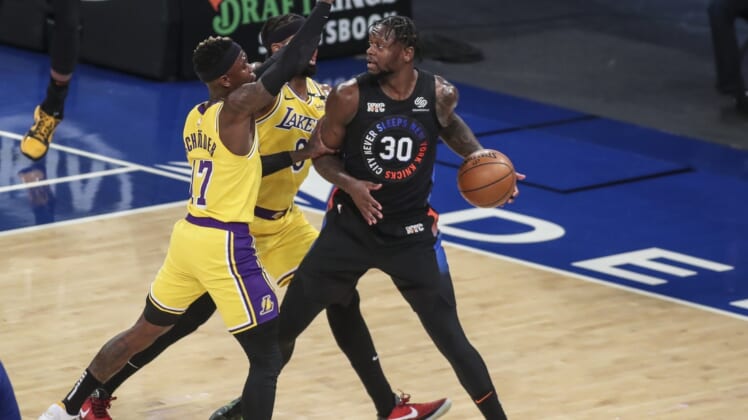 Julius Randle scored 34 points and grabbed 10 rebounds as the New York Knicks took control in the third quarter, fended off a comeback attempt in the fourth and recorded a 111-96 victory over the visiting Los Angeles Lakers on Monday night.

Randle thrived against his former team by shooting 13 of 23 from the field as the Knicks shot 47.2 percent overall and overcame missing 22 of 27 3-point tries. The All-Star forward also helped the Knicks survive a late comeback by scoring eight points in the final 4:26.

Elfrid Payton added 20 and reserve Derrick Rose chipped in 14 to help the Knicks survive a tough shooting night from RJ Barrett. Barrett missed his first eight shots and was held to seven points on 2 of 11 from the floor.

The Lakers dropped to 5-7 in the 12 games superstars Anthony Davis (strained right calf) and LeBron James (right ankle) have missed. Los Angeles was unable to follow up an impressive 25-point win over the host Brooklyn Nets on Saturday as it shot 6 of 18 in the third, 43.8 percent overall and committed 25 turnovers in the game.

The Knicks won their third straight following a 1-5 skid that featured three losses by two points or less. Less than 21 hours after holding off the Toronto Raptors, New York dominated the third quarter by outscoring Los Angeles 26-16 to carry an 81-68 lead into the fourth.

New York opened a 92-77 lead on rookie Immanuel Quickley’s three-point play with 7:10 remaining but the Lakers ripped off 10 straight points and got the lead down to 92-87 on a layup by Morris with 5:14 remaining. New York regained its footing, however, and used a 12-2 run to essentially seal the win, Randle’s layup making it 104-89 with 2:33 left the basket to put the Lakers away.

Caldwell Pope’s 13-footer forged a 56-56 tie a little over a minute into the third quarter but the Knicks took the lead for good on Reggie Bullock’s 3-pointer with 9:48 remaining. Bullock’s basket started a 23-8 run that extended New York’s lead to 79-64 on Randle’s 3-pointer with 94 seconds left in the period.