Even in defeat, Blazers prove they are a force to be reckoned with

The Portland Trail Blazers lost 80 percent of their starting lineup and two of their three best players last summer. This came on the heels of the team losing in the first round of the 2014-15 NBA Playoffs.

At that point, common logic seemed to suggest that the Blazers would be closer to winning the lottery than actually taking part in the playoffs this spring.

Something funny happened to common logic between then and now.

General manager Neil Olshey made a couple under-the-radar, but impactful trades. Terry Stotts proved his worth as a top-end NBA head coach. Meanwhile, the All-Star snub that is Damian Lillard showed that he can be the face of an upper-echelon team.

It all culminated in a tremendously successful second half of the regular season and a surprising trek to the Western Conference Semifinals.

While Portland ended up falling to the defending champion Golden State Warriors in five games, its ability to compete with what the best the NBA has to offer cannot be denied.

The Warriors threw haymakers throughout the series. Portland answered with counter-punches to the gut. It was one of those five-game series that really felt like it went seven. It was a titanic set between two teams that proved they could step up in the limelight of the NBA Playoffs.

For Golden State, in no way was this a surprise. Here’s a team that won a record 73 regular season games in 2015-16 after earning the NBA title last June. It boasts reigning two-time NBA MVP Stephen Curry. It has the experience. It has the talent. It’s an historical squad.

That’s what makes Portland’s performance this much better. It didn’t sit idly by and let the Warriors fulfill their destiny as the next great NBA dynasty.

Dame went head-to-head with Stephen Curry in the final two games. C.J. McCollum showed that his Most Improved Player award will likely be his least relevant award when all is said and done.

He did so after defying odds at every turn on his road to the NBA:

This is CJ McCollum playing for Canton Glenoak as a sophomore in 2007. Way to make the most out of a growth spurt. pic.twitter.com/Gwemd95N6Z

“First of all, I just want to say congrats to the Blazers for a fantastic season. That’s a terrific basketball team,” Kerr said. “Extremely well coached. They play together. They got great leadership. It’s not often that you play against a team in the playoffs and admire them at the same time.”

Kerr speaks for everyone who watched that five-game series.

More so than even Lillard and McCollum stepping their overall games up, the rest of the Blazers’ underrated roster told us a story of a team that played well together. A team that is most definitely on the upswing out west.

Many skeptics balked at Portland for giving Los Angeles Clippers castoff Al-Farouq Aminu a four-year, $30 million contract to replace Nicolas Batum last summer. After all, the former top-10 pick had never averaged more than 7.3 points per game in a season at the time of the signing.

His biggest claim to fame prior to a breakout 2015-16 campaign was being a throw-in for the Charlotte Hornets in the Chris Paul trade.

Aminu responded by averaging 10.1 points and 6.1 rebounds while shooting 36 percent from three-point range (all career highs) during the regular season.

He then picked his game up big time against the Warriors, going for an average of 17.2 and 8.4 while shooting 55 percent from distance.

The former lottery pick may never be more than a role player, but the role he played in Portland this season cannot be overstated.

Portland also took some heat for trading Batum to the Hornets in exchange for a player in Gerald Henderson that simply failed to live up to his first-round hype in Charlotte.

Considering LaMarcus Aldridge was already two feet deep in the River Walk in San Antonio, and prior to McCollum’s breakout season, the narrative here was that Portland just traded its second-best player for a scrub.

For the Blazers, it was all about the future with Henderson acting as nothing more than a throw-in. Then 19-year-old big man Noah Vonleh was the prize that went to the Pacific Northwest in that deal.

And while the former top-10 pick didn’t play a huge role for the Blazers this past season, he does have a bright future.

As it relates to Henderson, he was yet another piece that helped the Blazers exceed expectations.

The former Duke standout averaged 8.7 points while shooting a career-best 35 percent from distance in 20 minutes of action per game. He’s one of those rotational pieces, primarily on defense, that good teams need.

Losing Batum was a blow for the Blazers. He more than proved his worth to an equally surprising Charlotte team this past season. Though, the pieces Portland acquired in this deal will have impacts down the road.

The emergence of Allen Crabbe is also something to keep an eye on moving forward. An early second-round pick of the Cleveland Cavaliers back in 2013, Crabbe was immediately dealt to the Blazers.

Through his first two seasons, this CAL product seemed like nothing more than a deep bench option, averaging 2.2 and 3.3 points respectively.

With more of an opportunity due to the mass exodus of proven players last summer, Crabbe picked his game up big time. He averaged 10.3 points while shooting at a near 40 percent clip from three.

McCollum’s primary back and someone that can play the three when Portland goes small, he’s an important element for the squad moving forward. Crabbe surprised everyone by going for nearly 13 points in the series against Golden State.

Some will say the Blazers lucked into the postseason. Based off their 29-14 record from January 8th on, that’s a ridiculous conclusion to draw.

Others will say that Portland got lucky in the first round after both Chris Paul and Blake Griffin of the Clippers went down for the playoffs in Game 3 of that series.

Sure, there’s some question regarding what would have happened there if the Clippers top two stars were never injured.

It’s the very same “what if” scenario that people have pointed to when looking at the Warriors’ run to the title last year. “What if this guy hadn’t been injured?”

What we do know is that Portland finished off the Clippers with four consecutive wins. It then competed against the best the NBA has to offer in five hard-fought games in the conference semifinals.

Lillard is just 25 years old, and is coming off his best season. McCollum won’t turn 25 until right before the 2016-17 season. These are the two cornerstones. They also represent the most-productive backcourt in the NBA outside of the one dominating in Oakland.

In order for Portland to take that next step from feel-good story to title contender, certain things will have to work in its favor.

First off, the team is going to have to find an upgrade at the five. Neither Mason Plumlee nor Meyers Leonard are going to be the answers there.

Olshey and Co. also must see the team’s backcourt continue to take steps as it relates to ball movement while trending away from playing hero ball. 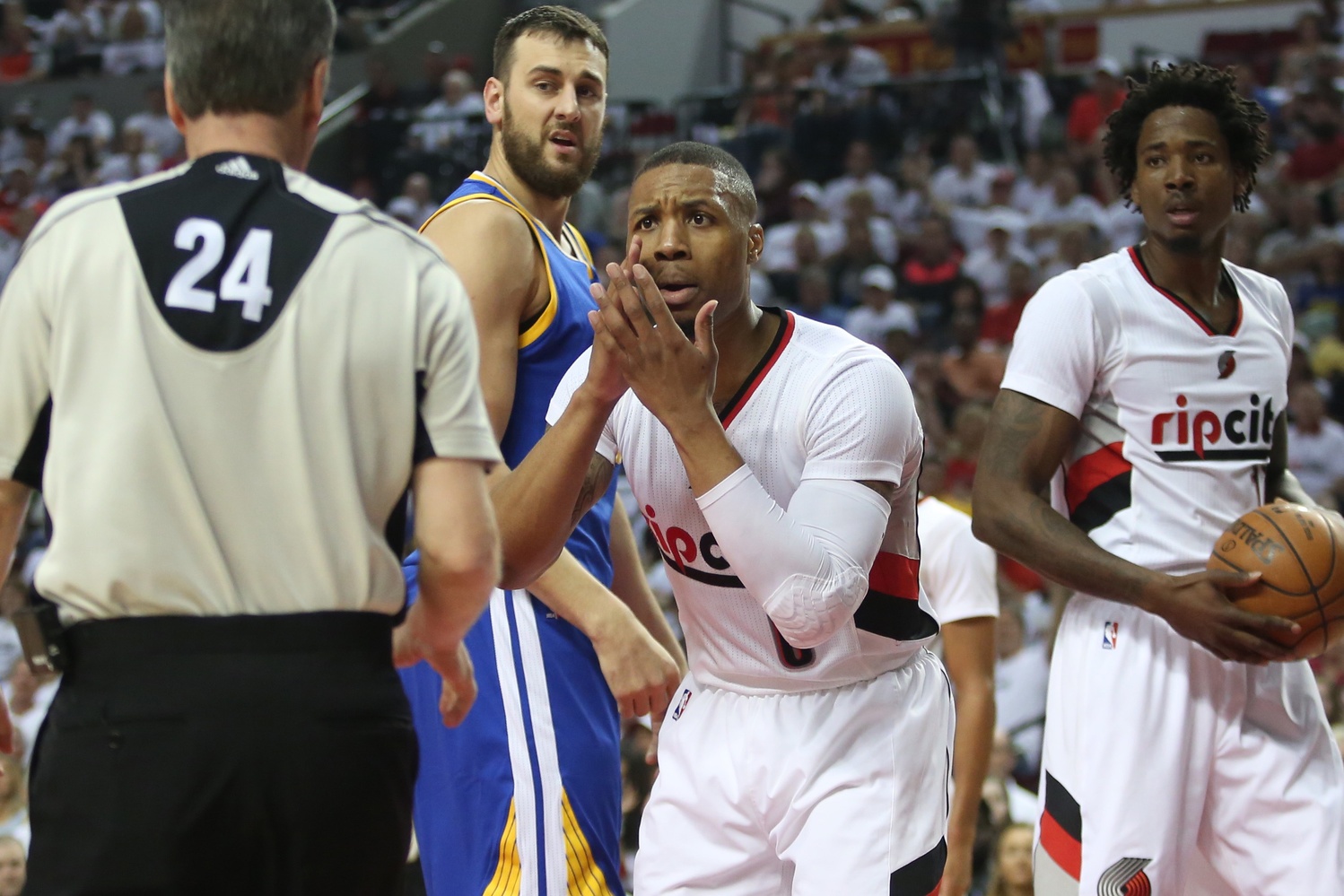 Lillard shot just 36 percent from the field against Golden State. Throwing up some rather ridiculous shots, potentially in an effort to match what Curry and Thompson did, Lillard averaged just 1.16 points per shot in the series.

For comparison’s sake, Thompson averaged 31.8 points per game while taking an average of 24 shots.

That’s going to be the biggest key here. Coming together to play team-friendly basketball while feeding off one another.

The talent is most definitely in Portland’s backcourt for these two to act like the next Splash Brothers. They’re just not there yet in terms of continuity.

If all this comes together, and while still playing in a tremendously difficult Western Conference, the Blazers are going to be a force moving forward.

What we saw in the team’s surprising performance against Golden State represents this to a T. It’s now all about building on that during what will be an important summer in the Pacific Northwest.