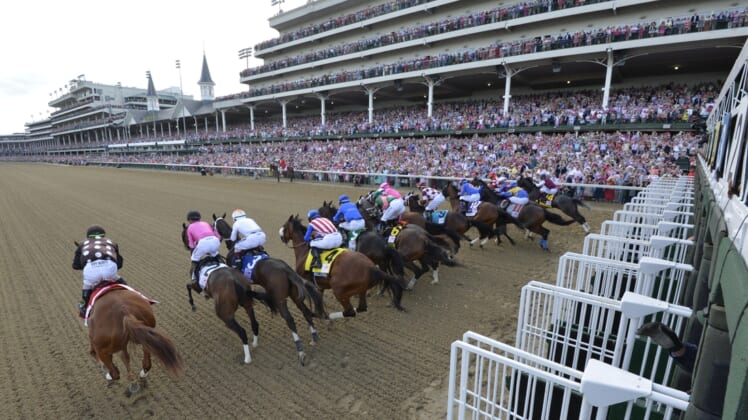 May 3, 2019; Louisville, KY, USA; A general view at the start of the 145th running of the Kentucky Oaks at Churchill Downs. Mandatory Credit: Jamie Rhodes-USA TODAY Sports

The Kentucky Derby and the first Saturday in May are back together again.

The first jewel of horse racing’s Triple Crown will be held Saturday before an expected crowd of around 45,000 at Churchill Downs in Louisville, Kentucky. The race was run last year without paying spectators and was delayed until Labor Day weekend due to the COVID-19 pandemic.

A son of Tapit, Essential Quality made it 5-for-5 in his career when he won the Blue Grass Stakes by a neck on April 3.

“It seems like his game face is on,” Cox said this week. “I think the one nice thing about Essential Quality is he can adjust (to any pace).”

Luis Saez will ride Essential Quality, who will break from the No. 14 post position. Cox also will send 15-1 Mandaloun to the No. 7 post under jockey Florent Geroux.

Cox, in his first Derby, will try to become the first Louisville native to win the 147th Run for the Roses.

Hall of Fame trainer Steve Asmussen also will be seeking his first Derby victory when he saddles 20-1 Midnight Bourbon (jockey Mike Smith, No. 10 post position) and 30-1 Super Stock, who won the April 10 Arkansas Derby. Asmussen’s parents are part owners of Super Stock, who will start in the No. 18 post position.

“The key to Midnight Bourbon having success is for him to be away cleanly, get into a high rhythm,” Asmussen said. “Super Stock is extremely versatile. He’ll go wherever (jockey) Ricardo (Santana Jr.) wants him to.”

Trainers Todd Pletcher and Doug O’Neill, both nominated for the National Museum of Racing’s Hall of Fame this year, each will be aiming for a third Kentucky Derby win.

Known Agenda, winner of the Florida Derby on March 27, drew the No. 1 post position. The last Kentucky Derby winner who started on the rail was Ferdinand in 1986.

“It certainly wasn’t the one we were hoping for,” Pletcher said. “But I’ve often said sometimes you get bad trips from good posts, and good trips from bad posts.”

Bourbonic, who will start on the far outside, and Dynamic One, post position No. 11, finished Nos. 1-2 in a relatively slow Wood Memorial on April 3.

O’Neill, who won the Derby with I’ll Have Another in 2012 and Nyquist in 2016, will start 8-1 Hot Rod Charlie under rider Flavien Prat.

Hot Rod Charlie, who captured the Louisiana Derby on March 20, will be starting from the No. 9 post position.

“Win, lose or draw, we’re bringing great energy to Charlie and he’s giving it back to us,” O’Neill said. “It’s a great post, right in the middle of the pack.”

Rock Your World, the second choice at 5-1 under Joel Rosario, will start in the No. 15 post position for trainer John Sadler. The colt, who did not race as a 2-year-old, won the April 3 Santa Anita Derby by 4 1/4 lengths over heavy favorite Medina Spirit, trained by Bob Baffert.

Baffert, who won his sixth Kentucky Derby last year with Authentic, will start 15-1 Medina Spirit from the No. 8 post position with John Velazquez aboard.

Trainer Mark Casse, inducted into the Hall of Fame last year, seeks his first Derby triumph. He will start 30-1 Soup and Sandwich, in post position No. 19 with jockey Tyler Gaffalione, and 50-1 Helium from post position No. 12 ridden by Julien Leparoux.

With the sport trying to move away from race-day medication, this year’s Kentucky Derby will be run for the first time without horses using the anti-bleeding drug Lasix.