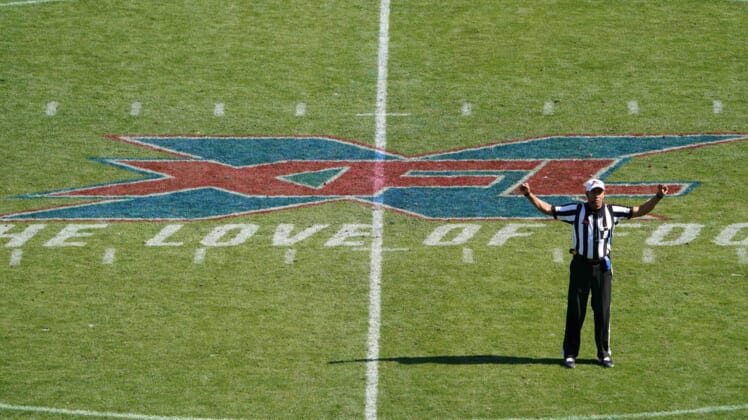 The revamped XFL was forced to fold this past spring amid the ongoing COVID-19 pandemic.

It really was a bit of bad luck for Vince McMahon’s start-up league, especially considering how popular it was coming off the culmination of the 2020 NFL season.

In no way does this mean the XFL won’t be back. The now-defunct league is expected to go into auction with final blind bids being submitted on Thursday.

Unfortunately, it looks like one big broadcasting partner wants out.

According to this report from Daniel Kaplan of The Athletic, the four-letter network views McMahon as a major component to any deal moving forward. It is not interested in continuing a broadcast relationship with the XFL without a new owner being known.

“With roughly 48 hours to go before the bid deadline, ESPN and Fox Sports are seeking major changes to their contracts,” the report noted. “And in the case of Disney-owned ESPN, there appears, based on court filings, little chance of a new contract.”

The inaugural season of the XFL was largely successful before it was suspended back in March as large regions of the United States were shut down due to the pandemic. Attendance averaged nearly 19,000 with markets such as Seattle and St. Louis seeing nearly 30,000 fans on average. It led to a belief that the XFL might be able to make it as a spring alternative to the NFL.

In court documents submitted by William Hardie of Houlihan Lokey, the firm handling the sale in bankruptcy court, the claim to perspective buyers included a stance that sports fans are “starved for content” during the spring.

That’s taken on somewhat of a complicated meaning since given that the 2020 college football season could very well be pushed to the spring due to the above-mentioned COVID-19 pandemic.

“The image and ultimate success of the XFL are heavily linked to the efforts, resources, and reputation of Vincent McMahon,” ESPN wrote in a statement to The Athletic. “If Vincent McMahon and his team of professionals are not running the XFL enterprise, then a key consideration for the Telecast Agreement … has disappeared, and ESPN cannot be compelled to join in a partnership with an assignee absent ESPN’s express consent.”

Given that McMahon will not be involved in any potential restart after spending over $200 million to initially restart the league, it’s understandable that ESPN would have hesitations. That’s no more true than during the economic downturn and long-term financial anxiety we’re seeing amid the pandemic.

Fox has also joined in with ESPN in pushing back against a restructured broadcast deal. Though, it is not going as far as the Bristol-based company.

All of this is interesting given that the XFL was able to end its contracts with players and coaches when it decided to fold during the spring. That obviously did not extend to broadcast relationships with either ESPN or Fox.

As noted above, bids have to be submitted by the end of day Thursday. The winning bid will be announced some time next week.

In general, there’s a strong thirst for spring football. We saw that first hand earlier in 2020. Whether that equates to the XFL getting enough support within the broadcast media world remains to be seen.