Dick Vitale, a staple of college basketball broadcasts for more than four decades, was back on the sidelines Tuesday amid his ongoing cancer battle.

An emotional Vitale addressed the ESPN audience prior to calling the showdown between No. 1 Gonzaga and No. 2 UCLA.

“I didn’t want to cry,” Vitale said, struggling to compose himself. “I can’t believe I’m sitting here. This is really a big thrill for me. I want to thank all you people sending me so many great messages. … I want to thank my family and all the fans. My, you’ve been unbelievable.”

Vitale revealed last month that he had been diagnosed with lymphoma. It was the second cancer scare of the year for the 82-year-old broadcaster, who had announced in August that doctors had detected melanoma above his nose several months earlier. Vitale underwent surgery to remove that growth and was declared cancer-free soon thereafter. 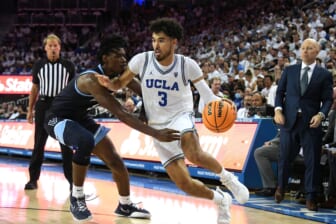 As for the lymphoma, Vitale is undergoing a six-month chemotherapy treatment and taking steroids, according to the treatment plan he initially revealed Oct. 18. Doctors have given Vitale a green light to broadcast games in between chemotherapy sessions throughout this season.

According to USA Today, a body scan on Monday will reveal Vitale’s full course for chemotherapy treatment and determine whether to intensify the steroids.

“I wouldn’t want to be anywhere else,” Vitale told the newspaper in reference to the college basketball community, “(than) sitting by my second family.”