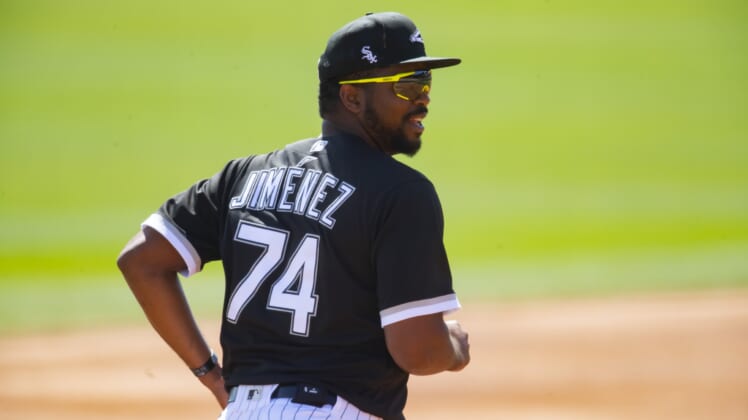 Chicago White Sox star Eloy Jimenez will miss the next 5-6 months after suffering a pectoral injury in Wednesday’s spring training game, leaving the club with a massive void to fill in the lineup just a week before Opening Day.

Jimenez crashed into the wall while trying to rob a home run against the Oakland Athletics, immediately going down in pain and then departing from the game. On Thursday, White Sox general manager Rick Hahn announced the team’s left fielder suffered a ruptured left pectoral tendon.

While Chicago will provide an update on its star’s recovery in about three months, the early recovery timetable projects Jimenez to return around September.

It’s a devastating blow for the White Sox, who were on the verge of entering the 2021 MLB season feeling confident. With a strong lineup and improved starting rotation, Chicago stood out as a potential World Series contender this year.

The Yankees are flush with outfielders, having far more options than they can afford to keep on the roster. According to SportsNet New York’s Andy Martino, New York is receiving trade inquiries about Tauchman. Following Jimenez’s injury, Chicago should be one of the clubs picking up the phone.

A look at Tauchman’s stats last season is a bad first impression. A .242/.342/.305 slash line with zero home runs in 43 games. But it’s important to mention he dealt with a shoulder injury in 2020 and plenty of players struggled in an unusual season. Before that, Tauchman hit 13 home runs, posted a .865 OPS and provided quality defense in the corner outfield.

The Yankees would likely be seeking a relief pitcher with multiple years of team control. That is a cost Chicago might be willing to pay.

If the White Sox don’t want to give up an MLB piece to acquire Tauchman, free agency becomes the best avenue to find talent. There isn’t a more talented player available than Yasiel Puig.

Puig makes a ton of sense for Chicago. He would fit in nicely into a clubhouse with multiple Cuban players and he offers the versatility to play multiple positions in the outfield. While he hasn’t played in an MLB game since 2019, he did post 24 home runs, 19 stolen bases and a .785 OPS in 2019 with the Cleveland Indians and Cincinnati Reds.

There are also off-field factors. Puig remains a free agent not because of past friction with teammates and managers, but due to sexual assault allegations. It’s a significant red flag that might give the White Sox series pause about signing him, even if the cost is relatively low.

Chicago needs to find a replacement for Jimenez. The club is already taking a risk by making Andrew Vaughn its primary designated hitter, since he only has a few months of experience hitting in the minors. A player with postseason experience makes a ton of sense for a young team, which is where Josh Reddick fits in.

The 34-year-old outfielder held a platoon role for the Houston Astros this past season. He was largely ineffective, posting a .245/.316/.378 line and struggling defensively. With that said, he posted a .728 OPS in 2019 and has had a .700-plus OPS every year since 2014. Capable of playing all three outfield spots, Reddick would be a fine addition for the White Sox.