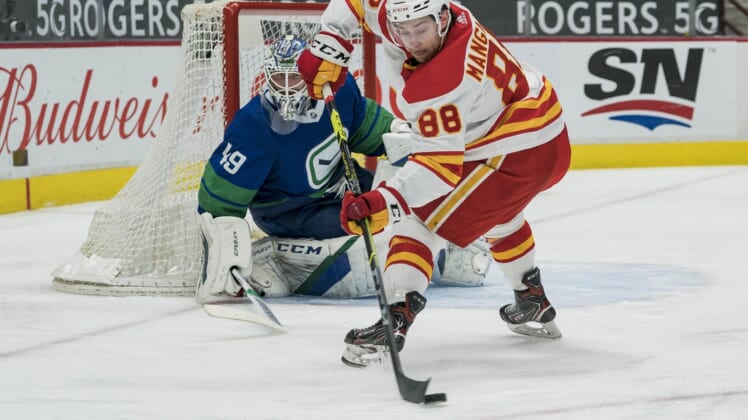 Elias Lindholm scored the overtime winner to give the Calgary Flames a 6-5 victory over the Vancouver Canucks on Sunday as the two teams work to finish their regular season while the rest of the NHL has moved onto the Stanley Cup playoffs.

After seeing a big lead disappear, Lindholm netted his 19th goal of the season when his shot from the right circle ricocheted off a defender and into the net 3:24 into the extra period.

The clubs meet again Tuesday in Vancouver and conclude the campaign with a third straight clash the next day in Calgary.

The Flames staked leads of 4-0 and 5-1 before falling apart in the third period. Leivo opened the scoring when he intercepted Jonah Gadjovich’s pass inside the Vancouver blueline and converted a backhand before the midway point of the first period — a rough start for Gadjovich in his NHL debut — before the visitors added a four-goal second period.

The hosts stormed back with a four-goal third period. Graovac netted his third of the season on the power play 2:30 into the frame and Boeser added another man-advantage marker at the 7:47 mark. Miller’s short-handed tally made it a one-goal game at 11:28 of the period and Boeser completed the comeback with 122 seconds remaining in regulation when he deflected Alex Edler’s point-shot blast for his 22nd goal of the season.