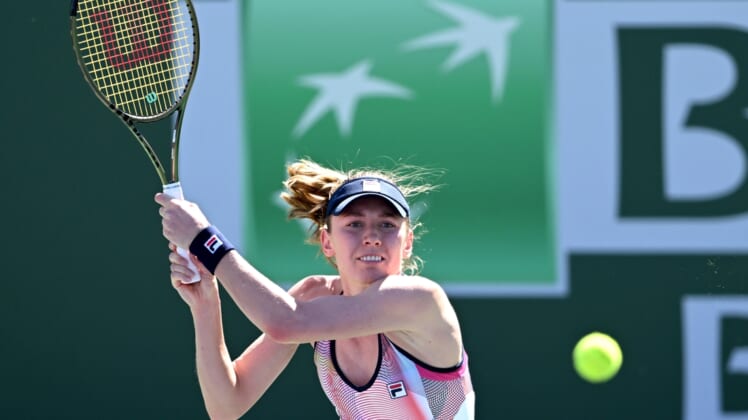 Alexandrova’s quarterfinal opponent will be Amanda Anisimova after the American beat 15th-seeded Victoria Azarenka of Belarus 6-1, 6-4.

In the day’s only matchup of seeded players, No. 8 Ons Jabeur of Tunisia defeated 11th-seeded Belinda Bencic of Switzerland 6-2, 3-6, 6-2. Jabeur moves on to a quarterfinal matchup against two-time Madrid champion Simona Halep. The unseeded Romanian downed 14th-seeded Coco Gauff of the United States 6-4, 6-4.

Bouzkova prevailed in an 83-minute first set against Alexandrova despite dropping her first service game and facing eight break points at 1-3. She broke back to level the set at 4-4 before ultimately winning the tiebreaker.

Alexandrova cruised in the second set and went up 5-3 in the third set before needing four more games and five match points to seal the victory.

“It was super tough, and (Bouzkova) played so well,” Alexandrova said. “It was kind of impossible to finish the points because she was everywhere. Every ball I hit, she’s hitting back.”

Anisimova had a much easier day’s work, cruising to victory in 81 minutes.

“I think it was a really tough match, but I was playing well throughout all of it,” Anisimova said. “It was my first time playing (Azarenka) so I was really excited, and I’m just happy to get this win.”

Jabeur came through at the key moments in her win over Bencic, saving five of the six break points she faced on her serve. The two played a rematch of the Charleston, S.C., final last month that Bencic won in three sets.

“Part of me is very proud of myself for coming today and getting the win,” Jabeur said. “Belinda is such an amazing player and it’s very tough to play against her. I’m very happy with the level I showed today, and hopefully this level will continue for the rest of the tournament.”

Jabeur will seek her first win over Halep in a complete match. The players have squared off three times, with Jabeur’s only victory coming in 2018 on a day when Halep retired midmatch.

“She’s a great person, first of all, because we get so well together,” Jabeur said. “It’s always nice to talk to her. But every time on court is a big fight, big battle. I’m expecting a big one next round.”