What an array of excitement there was in the NFL in Week 13. As usual, certain select teams such as the Detroit Lions once again were the victims of some sketchy referee play calling. Meanwhile, Hail Marys and comeback victories saved other teams.

Along with some atrocious quarterback performances that consisted of pick-sixes by none other than Tom Brady himself, there were other quarterbacks who made their team’s running backs look obsolete when they stole the show on the ground.

Finally, there were the awesome and irritating touchdown celebrations that found their way into this week’s winners and losers. 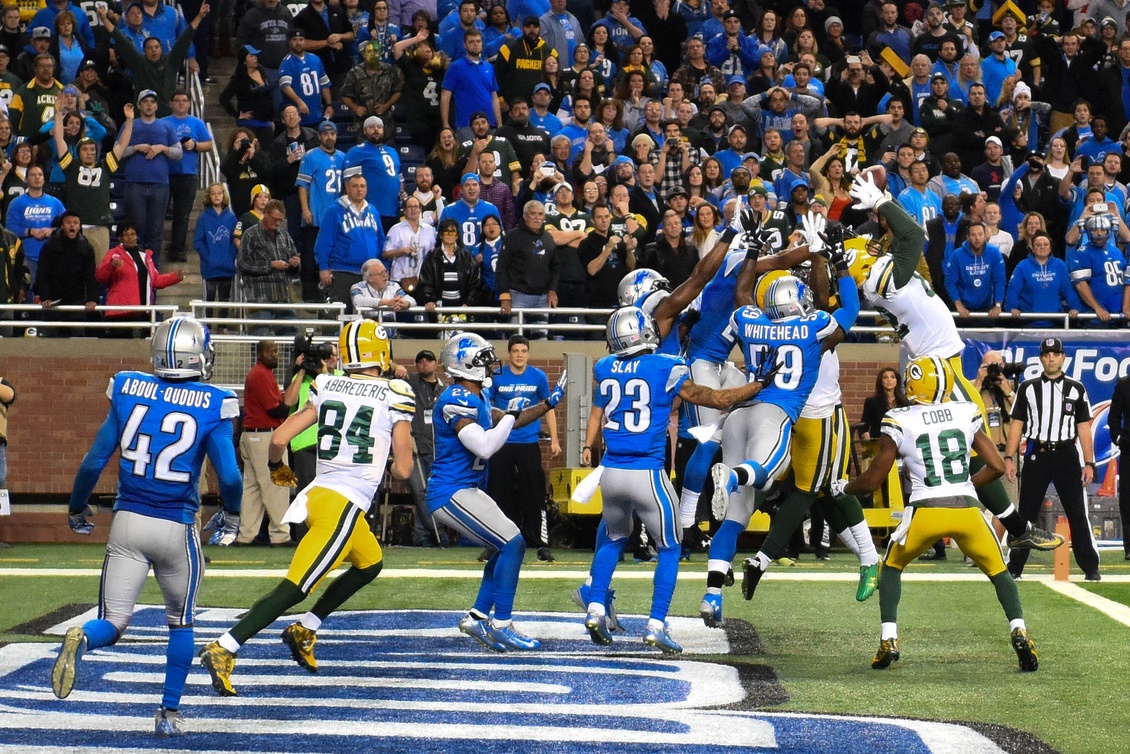 In a riveting Thursday Night Football NFC North showdown, a Green Bay Packers team that was down 20-0 to the Detroit Lions well into the third quarter made an incredible comeback that resulted in an unbelievable Hail Mary win, 27-23.

For the first portion of the game, the Lions out-played the Packers in what looked like a game Detroit easily had in the bag. Then Rodgers and Co. kicked it into gear, thanks in part to rookie running back John Crockett, and the team put 27 points on the board in slightly more than 20 minutes.

The first score came when James Starks fumbled at the Detroit five-yard line. Quick to secure the ball was Randall Cobb for the first touchdown. Then a Lions turnover shortly afterwards on a Matthew Stafford fumble set Aaron Rodgers up to hit Devante Adams for another touchdown.

The Lions added a field goal, followed by a Rodgers rushing touchdown, leaving the Packers down 23-21 with eventually just six seconds on the clock.

Then what appeared to be a game-ending tackle by defensive end Devin Taylor turned into a penalty for an alleged facemask. This gave Rodgers one more shot when he threw a fantastic 61-yard pass into the end zone right into the hands of tight end Richard Rodgers, for a game-winning Hail Mary (watch here).

Needless to say, the Lions were devastated. On a different note, the facemask call on what later did not appear to be a penalty adds to the tally of questionable penalties that seem to ruin games for Detroit. 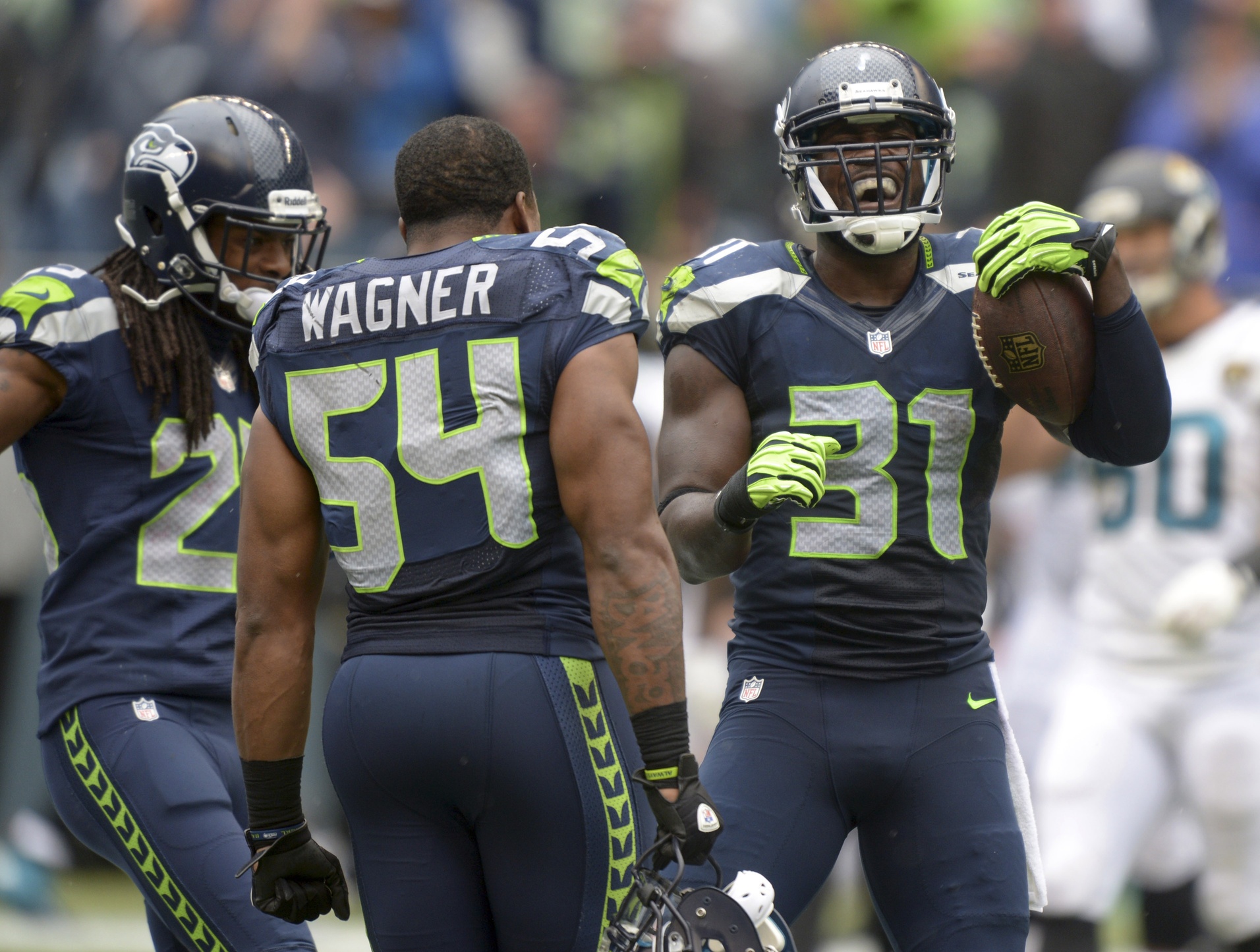 In what was expected to be a low-scoring affair between two teams with formidable defenses, the Vikings caved at home to Seattle’s Legion of Boom. Russell Wilson, like he did last weekend, once again stole the show in a 38-7 loss for Minnesota.

While Wilson was red-hot once again, passing for 274 yards, three touchdowns and a rushing touchdown, the Vikings totally crumbled under pressure. Sadly, all the Vikings could manage was one lone score which came on a 101-yard return touchdown from wide receiver Cordarrelle Patterson.

Unfortunately, Patterson’s play was the only thing pretty that happened on the Vikings side of the field. Teddy Bridgewater was miserable, passing for only 118 yards and one interception. And, there was zilch of a rushing attack which consisted of only 31 net yards due to the Vikings huge deficit in score.

As a result of Minnesota’s loss, the Green Bay Packers (8-4) advanced ahead of Minnesota to regain the lead in the NFC North by a half-game, due to their win over the Vikings three weeks ago.

There were many fabulous touchdowns scored on Sunday, but this 87-yard rushing touchdown by Tennessee Titans rookie quarterback Marcus Mariota wins the gold medal.

Finishing the day with an incredible total of 112 rushing yards, Mariota became the first Titan to top the 100-yard rushing mark since the last game of the 2013 season. So much for Tennessee even needing running backs on their roster, right?

In what was overall an incredible effort against the Jacksonville Jaguars, Mariota also added 268 passing yards and three touchdowns to his stunning rushing score, leading the Titans to a tight win of 42-39.

And while Mariota dazzled, the Jags didn’t exactly lay down and give up. Blake Bortles was quite phenomenal as well when he completed 24-of-36 passes for 322 yards, five touchdowns and zero interceptions. Additionally, T.J. Yeldon rushed for 57 yards and scored his first career rushing touchdown.

In what was one of the most thrilling and high-scoring games of the day, Mariota helped the Titans to their third win of the season, which is one more than they finished with in 2014.

Loser: Matt Schaub reminds the world why he is a backup

In a typical  Schaub-like performance, the Baltimore Ravens second-string quarterback reminded us all why he remains a backup in the NFL.

Late second quarter, Schaub was intercepted by Miami Dolphins defensive end Derrick Shelby who returned the pick for a 22-yard touchdown. Schaub’s pick-six made it the 14th of his career and his second in his two starts this year with Baltimore.

Furthermore, Schaub’s pick-six came just three throws after he was intercepted in Ravens territory, which led to quarterback Ryan Tannehill connecting with DeVante Parker for a 38-yard touchdown. Joe Flacco’s turnovers routinely cost the team wins before his season-ending knee injury, and now Schaub fits the job description for a 2015 Ravens quarterback perfectly.

Unfortunately Schaub, who has thrown four interceptions in his last six quarters, helped the team lose to a very beatable Dolphins team by a score of 15-13.

Winner: Time to give Blaine Gabbert some love

Even more special was that Gabbert’s run-in score tied the game with the Chicago Bears, leading to a thrilling overtime victory for the 49ers, 26-20 at Soldier Field.

In addition to Gabbert’s rushing score, he kept his game clean with no turnovers and ran for a total of 75 yards on top of 196 passing yards and one passing touchdown. And, though Gabbert only had one passing touchdown, it was the game-winner. He hit up Torrey Smith for a 71-yard, game-winning score in overtime.

Gabbert is now 2-2 as the starter, and it’s about time to remove the bust label that has been affixed to his name the past half-decade.

Regarding the Bears, Jay Cutler was his hum-drum self passing for 202 yards, zero scores and one interception. And, it was actually running back Matt Forte who put up the best performance for the team when he rushed for 84 yards on 21 carries and one touchdown.

With the 49ers still unfortunately saddled to the bottom of their division (4-8), the much-needed win and a star performance by Gabbert will at least take the heat off and provide a boost of confidence heading into next week.

In a thrilling victory at the Superdome over the New Orleans Saints 41-38, the Carolina Panthers weren’t polite houseguests when it came to their touchdown celebration antics.

Fans obviously love the celebrations, though foes are often offended. The latter was the case when twice in Sunday’s game, the Panthers brought a touchdown ball up to this same front row area to give to a child fan wearing Carolina teal.

And, twice the disgruntled fan on the left angrily waved away with a flag, each Panther who came to reward a ball. This video clip had rookie Devin Funchess, whom Cam Newton hit up for a 13-yard touchdown, first joint-celebrating with Newton, then bringing a ball up to the stands to a happy kid.

While rewarding touchdown balls to kid fans is a common practice this season, so are the Panthers’ dancing celebrations. Mike Tolbert busted out with his version of “the Carlton” in Sunday’s game.

Fortunately for the still undefeated Panthers, their cockiness was accompanied by a win that might have been too close for comfort for Newton, who passed for another fabulous five-touchdown performance.

Some how, some way, the Giants managed to tank a 20-10 fourth-quarter lead that eventually found the Giants and the Jets squaring off in overtime, tied at 20 points a piece.

Unfortunately, a classically-timed Eli Manning interception helped the Jets gain a leg up when the quarterback got picked off in the fourth quarter by Rontez Miles on a pass intended for Rueben Randle. 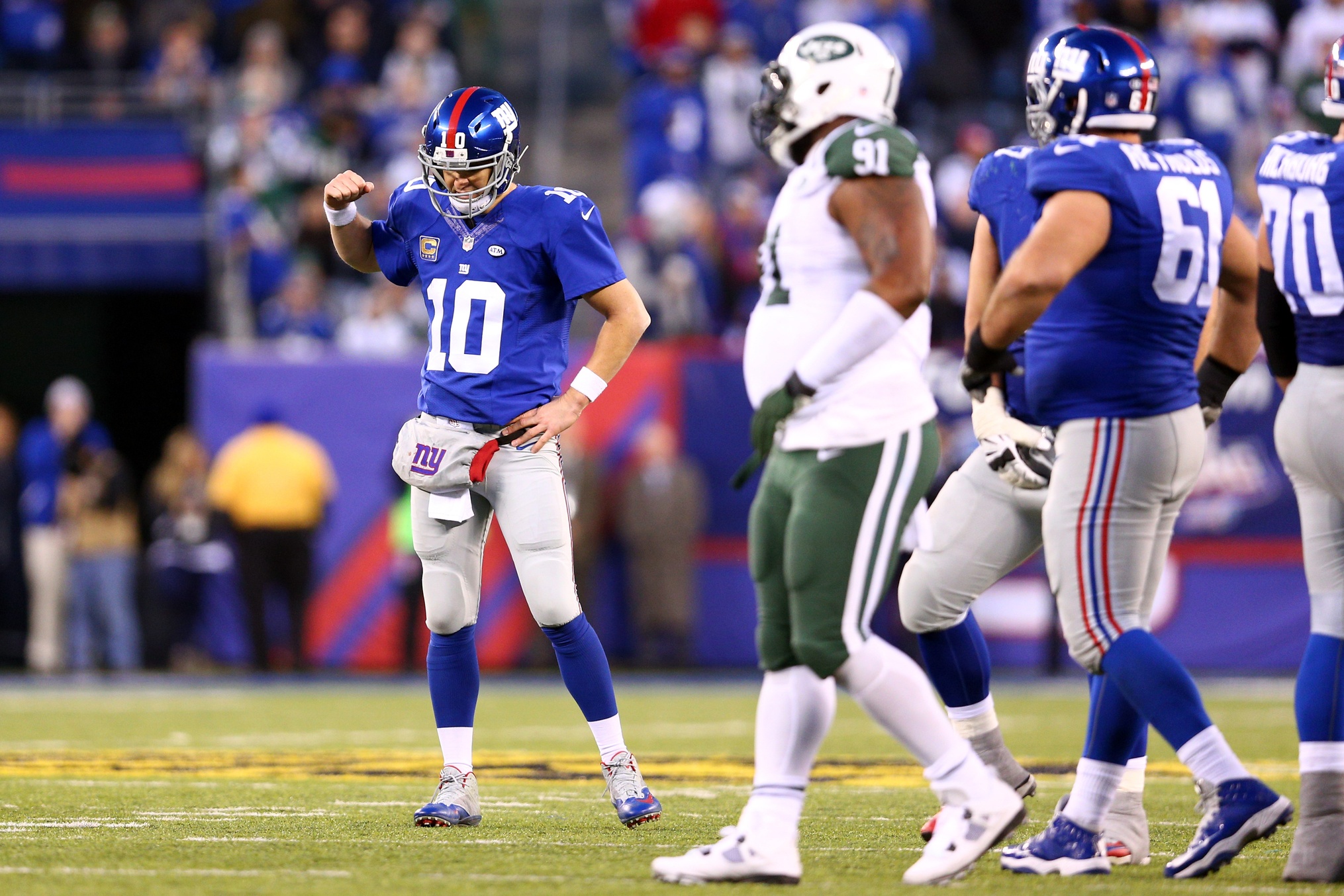 The Jets scored a field goal on their next possession, and that is when all went south for the Giants, who never scored again and eventually lost 23-20 in overtime.

Manning struggled to complete just 53 percent of his 34 passes for 297 yards, the interception and just one touchdown. Meanwhile, Jets quarterback Ryan Fitzpatrick completed an impressive 36-of-50 passes for 390 yards, two touchdowns and zero interceptions.

Both Jets leading receivers Brandon Marshall and Eric Decker had 100-plus receiving yards. All the while fantasy football spoiler, running back Bilal Powell, came out of nowhere and tallied 91 receiving yards and a receiving score.

The win for the 7-5 Jets helped them stay relevant in the AFC playoff race. On the other side, the big loss for the 5-7 Giants landed them in a tie for second place in the NFC East, at least until Washington plays Dallas on Monday night. 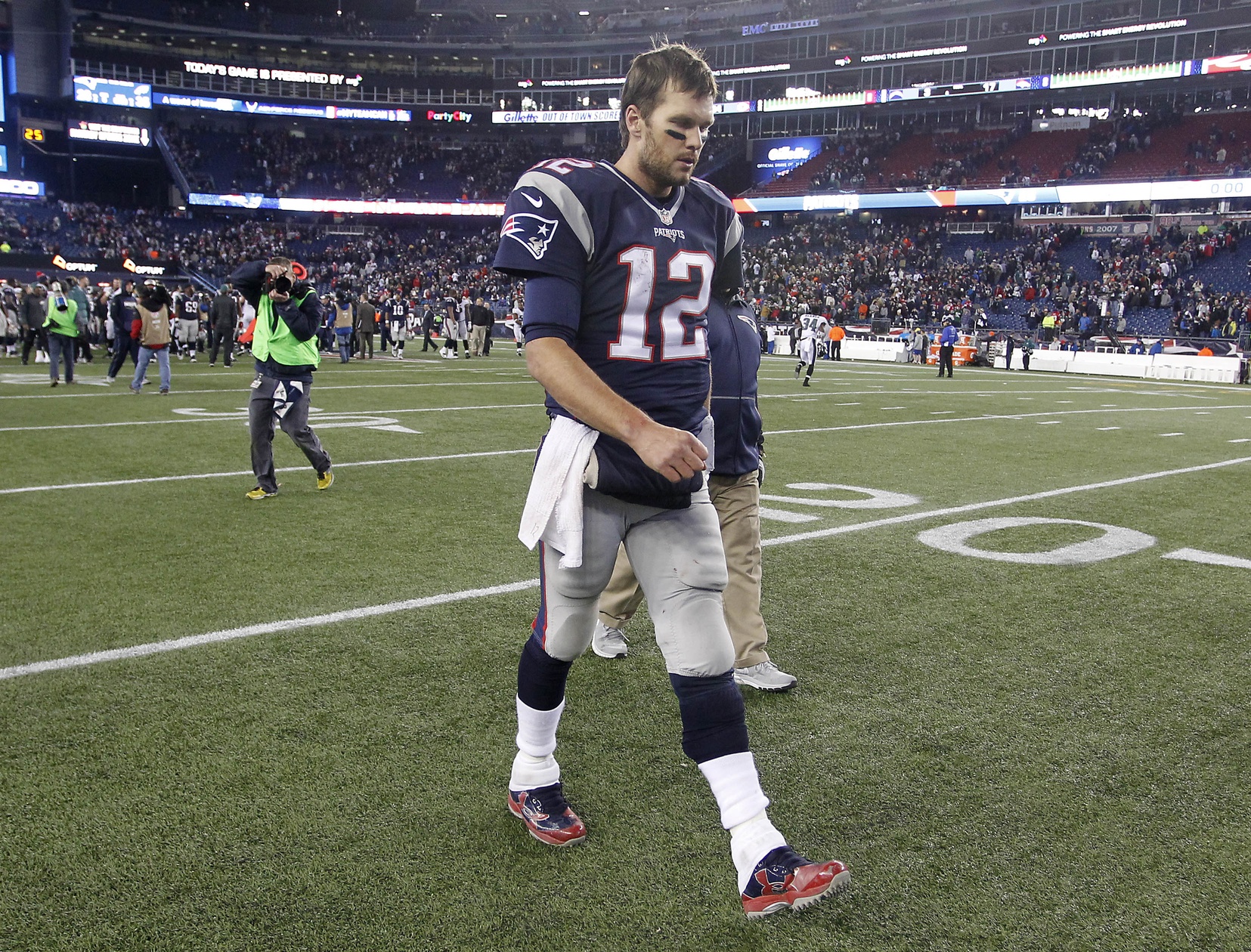 The Philadelphia Eagles had never managed a Tom Brady pick-six until Sunday.

Unfortunately for Brady and the Patriots, that interception, along with many other things that went terribly wrong, had many viewers wondering if the two teams had switched uniforms in a 35-28 loss for New England.

Whether it was the combination of injuries that crippled the Patriots’ performance or just stellar play on the end of the Eagles, New England fought an uphill battle all day long.

Along with the pick-six, which was intercepted by Malcolm Jenkins and returned for a 99-yard touchdown, the quarterback passed for 312 yards, three touchdowns and two interceptions.

Even attempting to play wide receiver, Brady ultimately couldn’t turn the game around.

As for Sam Bradford, he didn’t do a lot, passing for only 120 yards. However, his two touchdowns and zero turnovers were just enough, in combination with the talents of the Eagles’ defense and special teams unit to keep the Patriots chasing their tails throughout the game.

The loss for the Patriots (their second in a row), was a devastating one that shoved a 10-2 New England into third place in the conference behind Denver and Cincinnati, based on tie-breakers. It also opened the door a crack for a 7-5 Jets team in the AFC East.

Regarding the win for the Eagles, it advanced the team to second place in the NFC East.