With a vast majority of NBA teams cash strapped heading into free agency, we’re certainly going to see a lot more movement on the trade front. That could start as early as the 2018 NBA Draft on Thursday.

It starts with disgruntled San Antonio Spurs star Kawhi Leonard and continues with the likes of Karl-Anthony Towns and Harrison Barnes potentially being moved.

It’s in this that we take a look at eight NBA Draft day trades that we’d all love to see. Most of these are blockbusters with big names involved. Though, the salaries line up perfectly, and you’re not going to see a single lopsided trade. 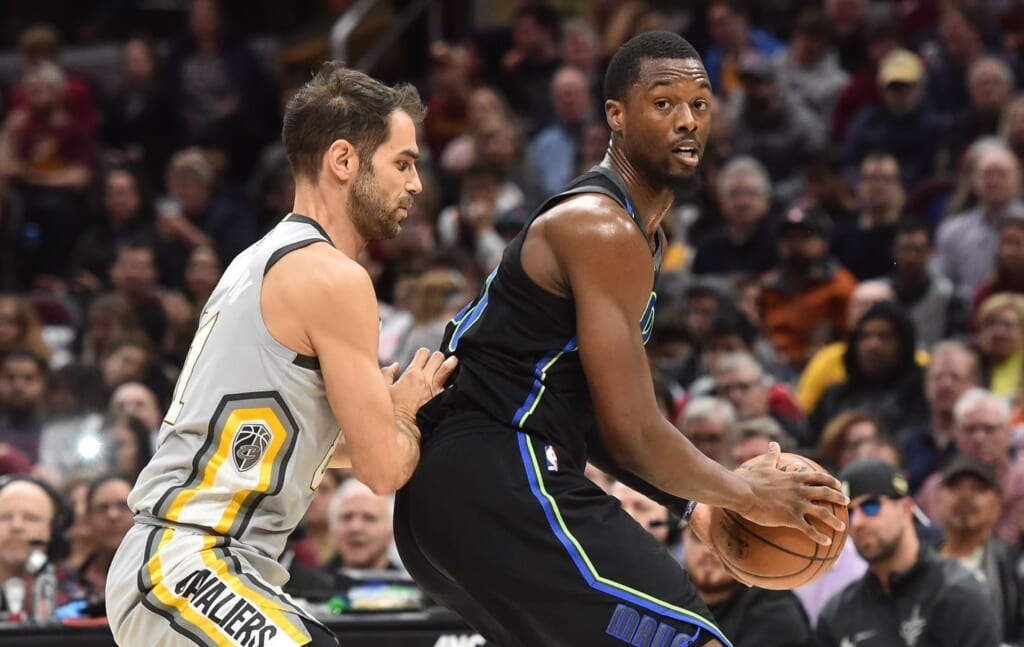 At this point, we do know that Dallas is willing to pick up the remainder of Parson’s absurd contract should it be able to acquire a top-10 pick in return. We also know that Memphis is shopping both the player and the pick. Parsons, 29, has played a grand total of 70 games in two seasons with the Grizzlies — averaging less than eight points per game during that span. He’s also owed nearly $50 million over the next two seasons.

If Memphis hopes to move Parsons, it would have to include that fourth pick as a sweetener. This is where Dallas comes into play. Selecting fifth overall in a loaded draft, its rebuild process would be expedited with back-to-back picks in the top five. Meanwhile, Memphis would be getting a solid starter in Barnes in return.

Whether LeBron James moves on in free agency or not, two things are clear: Kevin Love is squarely on the trade block and the Cavaliers need a new starting point guard. George Hill proved completely unworthy of that role last season. Boasting a top-10 pick in this year’s draft, Cleveland could use that selection to either find a long-term replacement for Love or trade the pick for a proven player. It makes just too much sense from Cleveland’s standpoint, especially with Teague still playing at a near All-Star level.

The Wolves’ situation is a tad different in that they are coming off a surprise playoff appearance and have a solid young core. Unfortunately, it seems that there’s going to be some major shake-ups in Minneapolis this summer. That could include the Wolves bringing Love back on the cheap. He’s instant offense. Period.

Hawks trade Dennis Schroder to the Suns for Brandon Knight, Dragan Bender, a first-round pick and a second-round pick 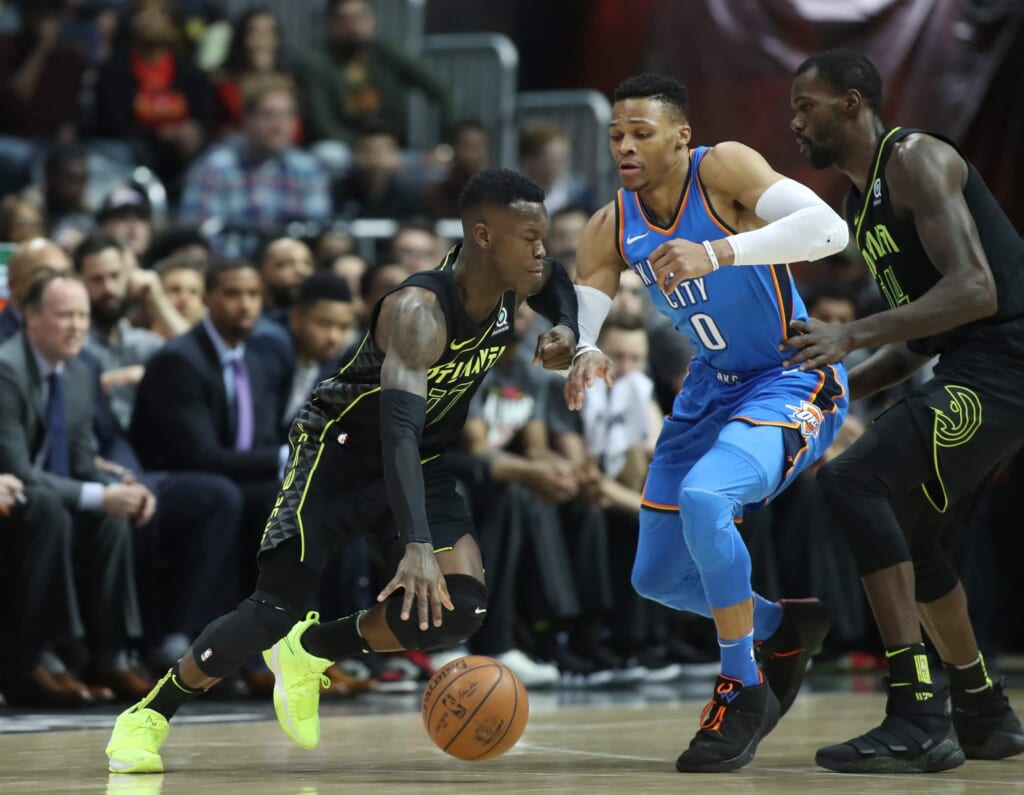 Atlanta is said to be willing to pick up bloated contracts in exchange for more draft capital. That includes the rebuilding team kicking the tires on adding Denver Nuggets forward Kenneth Faried. But we have a better idea. Why not use Schroder as a trade chip to acquire multiple picks? Atlanta is already looking to move the guard, and the Suns must find a way to pair Devin Booker up with a starter-caliber point moving forward.

This trade scenario includes Atlanta adding the contract of Brandon Knight ($30-plus million over the next two seasons) while picking up two valuable draft picks (16th and 31st overall) as well as a potentially high-upside youngster in Bender. Meanwhile, Phoenix gets a long-term solution at point guard and still boasts the No. 1 overall pick.

Following an embarrassing four-game sweep at the hands of Cleveland in last season’s playoffs, Toronto fired head coach Dwane Casey. It’s also said to be willing to move pretty much any player on the team’s under-performing roster. We have no idea if that will include multi-time All-Star DeMar DeRozan, but he would bring the most back in return.

In this hypothetical deal, the Clippers acquire a star to help with their rebrand effort after trading away both Blake Griffin and Chris Paul over the past calendar year. Meanwhile, Toronto adds three solid rotational pieces as well as two lottery picks in a stacked draft class. It just makes too much sense.

Magic trade Nikola Vucevic to the Spurs for Patty Mills, Brandon Paul and a first-round pick

If the Spurs are in fact going to trade Kawhi Leonard, they have to make a decision between a complete rebuild and attempting to recharge on the fly. Without Leonard, this is a bottom-end playoff team out west. But depending on what San Antonio can get for the All-Star, that could change on a dime.

What we do know is that Dejounte Murray is the Spurs’ point guard of the future. That makes the recently re-signed Patty Mills expendable in the grand scheme of things. Why not attempt to flip him with a pick for an underrated center in Vucevic? It’s a move the point guard starved Magic would certainly entertain, especially with San Antonio sweetening the pot with a youngster in Paul as well as a first-round pick.

Pelicans trade Anthony Davis to the Celtics for Kyrie Irving, Jaylen Brown and a first-round pick

The blockbuster to end all blockbusters. While New Orleans has pushed back against trading this generational talent, there’s no telling if Davis is happy about continued missed playoffs and early postseason exits. It’s led to multiple teams considering going after Davis this summer, the Golden State Warriors included.

In the unlikely event Davis is dealt, this is the move that makes the most sense. New Orleans would be able to add a franchise talent in Irving as well as one of the best young players in the game in the form of Brown. Add in a future first-round pick, and there’s a lot to like here. From a Celtics perspective, Davis would be that extra piece to put the team over the top back east. Just imagine Davis teaming up with Gordon Hayward, Al Horford and Jayson Tatum. That’s a dynamite foursome right there.

Timberwolves trade Karl-Anthony Towns to the Kings for De’Aaron Fox, Buddy Hield and the second pick 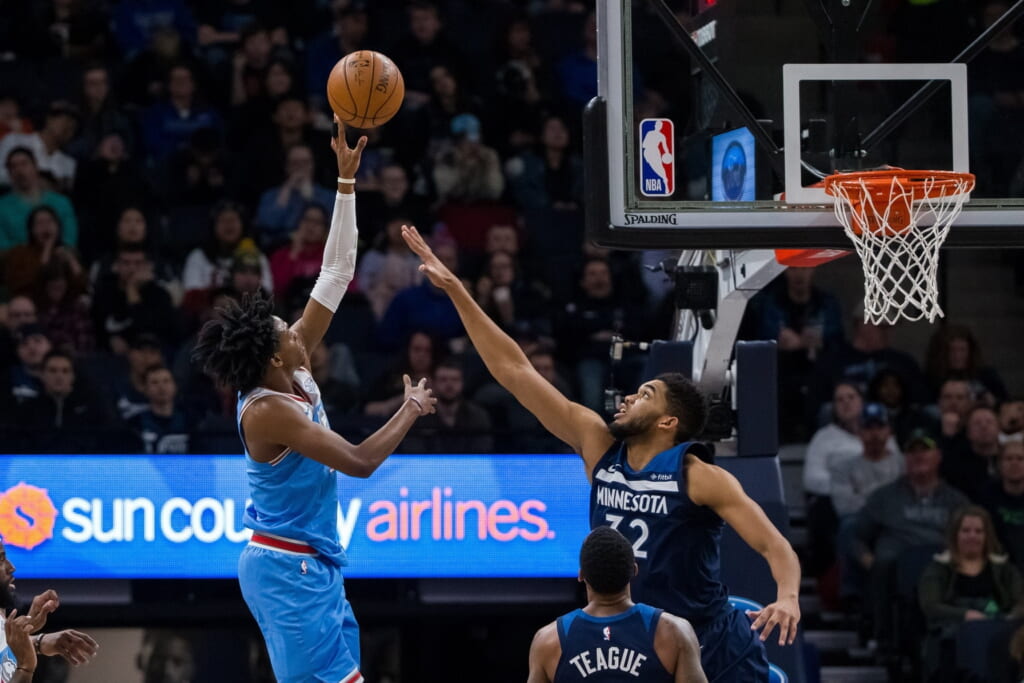 Rumors continue to persist that Towns might be traded by Minnesota. As shocking as it might seem, something just isn’t right in Timberwolves land. A trade definitely remains unlikely on this front. But in today’s NBA, we can never say never. If that’s the case, expect any trade involving Towns to bring back a massive haul for Minnesota.

In this scenario, Towns is sent to a Kings squad that’s seemingly in desperate need for a franchise-altering player. In doing so, Sacramento sends two recent lottery picks and the second overall selection in the 2018 NBA Draft to a Wolves team that might very well look to rebrand on the fly.

This is the trade the entire NBA is waiting for. Flush with a ton of draft assets and young players, the up-and-coming Sixers have an opportunity to add another key piece to the mix to go with Joel Embiid and Ben Simmons. It’s really the only way this squad is going to be able to get over the hump back east.

This hypothetical trade includes Philadelphia sending last year’s No. 1 pick Markelle Fultz and a talented wing in Dario Saric to San Antonio. It also includes the 10th overall pick in this year’s draft. If San Antonio is in fact forced to trade Leonard, this might be the best offer it receives. Philadelphia can certainly offer this bounty up to the Spurs as a way to become favorites in the Eastern Conference.