The NBA Playoffs have gotten off to a rather lackluster start. Competitiveness has not really been the name of the game with five of the eight series featuring one team without a single win. And while there has been some drama, including Cleveland’s comeback against Indiana on Thursday, it’s been pretty ho-hum thus far.

In keeping with that theme, here are eight players that have struggled through the early part of the playoffs. One could even conclude that they have choked after what were tremendously successful regular season.

This list includes a great all-around guard in Boston as well as a top MVP candidate looking to make his Oklahoma City Thunder click on offense. Here’s a look at the eight players we’ve seen choke through the first several days of the postseason. 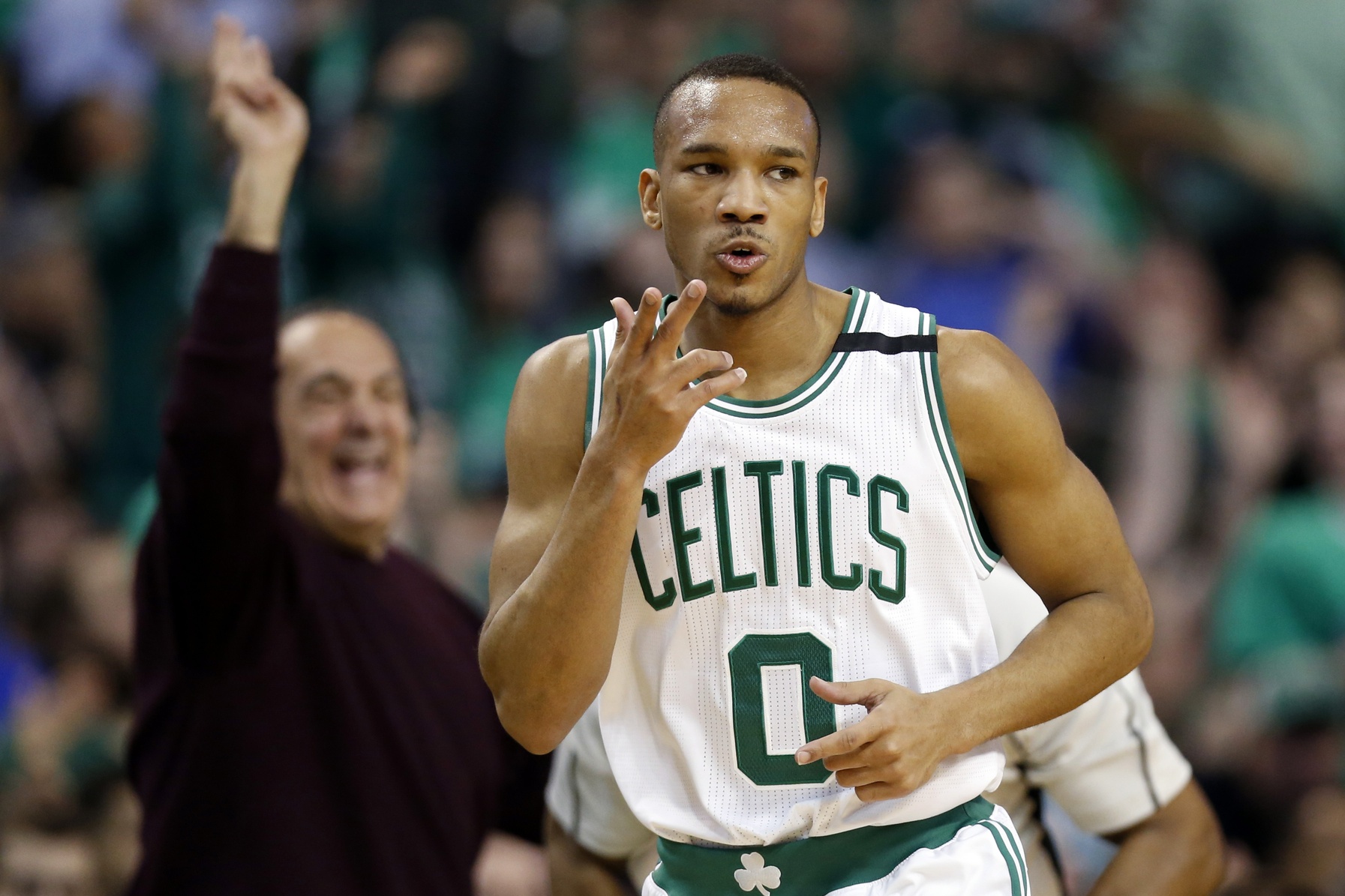 Bradley did struggle through injuries during the regular season, but he appeared to be 100 percent when the playoffs started. However, the guard’s performance just has not been up to snuff in the first two games of his team’s first-round series against Chicago.

Bradley is shooting at a horrendous 36 percent clip from the field, including a woeful 40 percent mark from two-point range. He’s also adding just 2.5 rebounds per game. That’s down from the 6.1 he put up during the regular season.

Equally as important for a Celtics team looking to climb out of a 2-0 series hole, Bradley’s defense just has not been up to snuff. Jimmy Butler is averaging 26.5 points, 8.5 rebounds and 5.5 assists while shooting at a 40 percent clip from distance in the series. For comparison’s sake, Butler put up a split of 20.3/6.8/3.8 against Boston during the regular year.

If Bradley does not improve defensively, this will be a rather short series. He also has to find a way to create his own shot on offense with Isaiah Thomas being the only Celtics player able to do that thus far during the playoffs.

We covered Turner’s matchup with Kevin Love in previewing the playoffs. Indiana’s only hope in this series was for this second-year player to perform at a high level offensively, especially when tasked with going up against Love when the Cavaliers go small. Through the first three games of the series, it’s been an absolute dumpster fire for Turner.

He put up six points on 3-of-12 shooting in Thursday’s five-point loss. Thus far in the series, Turner is shooting just 32 percent from the field and is averaging 7.7 points per game. Here’s a dude that shot at a 51 percent clip and averaged 14.5 points as a sophomore during the regular season.

Unfortunately for the Pacers, they now find themselves on the verge of being swept out of the first round after blowing a 26-point lead in Game 3. Even if Turner were to suddenly turn this thing around, it’s way too late for the team. If nothing else, Indiana realized in these playoffs that the 21-year-old center is not yet ready for prime time. 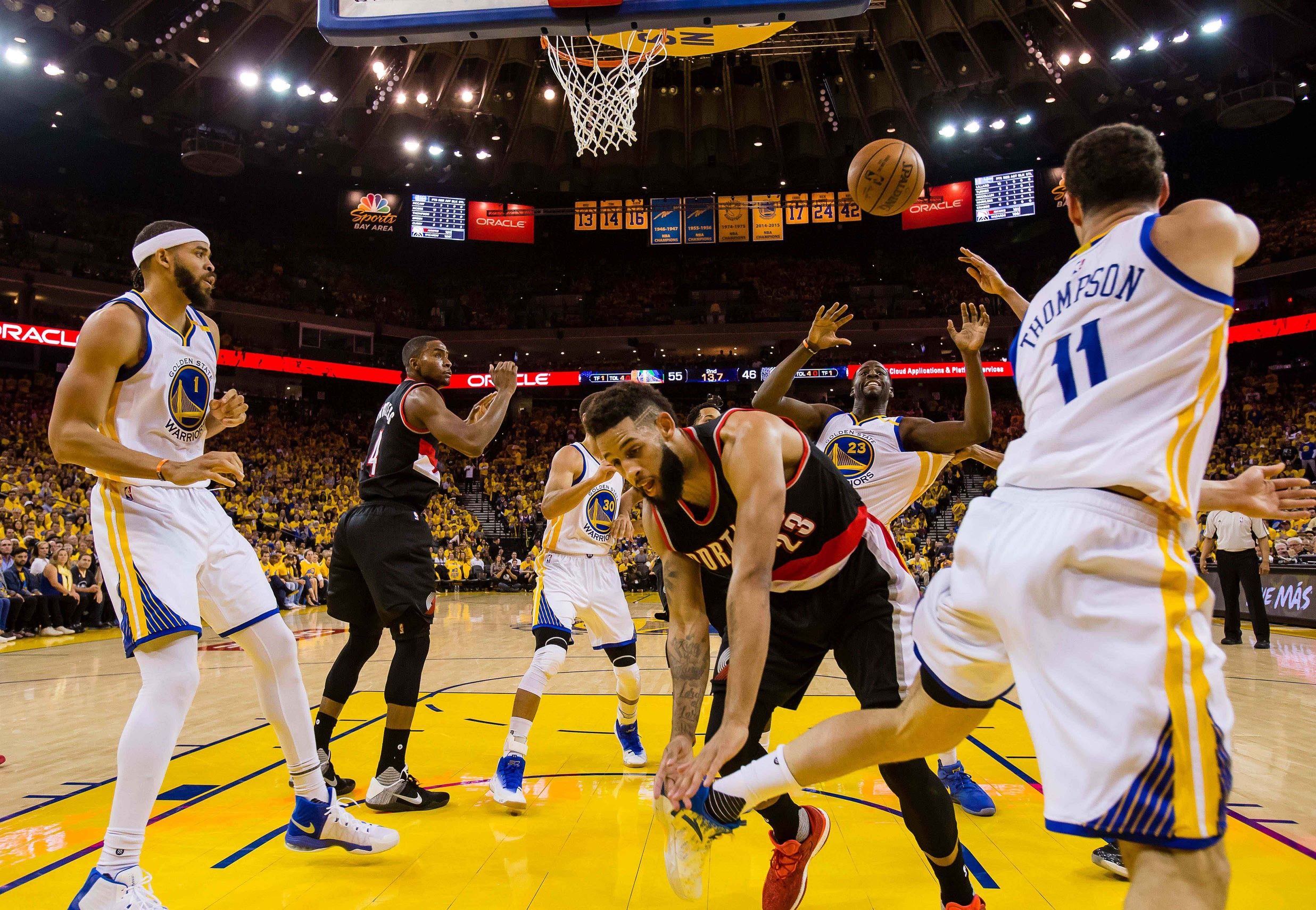 Much like Bradley, Crabbe was dealing with some injuries during the regular season. Unlike Bradley, Crabbe’s injury took place late in the regular year. That could be what impacted his performance in the first two games (both losses) to Golden State. Either way, he needs to step it up for the Blazers to even salvage a game in this series.

Signed to a four-year, $74.8 million extension last summer, the expectation all along was that Crabbe would act as a third scorer behind Damian Lillard and C.J. McCollum. That simply hasn’t happened. The former lottery pick is shooting 27 percent from the field and a disastrous 13 percent from distance in the series. He’s also averaging just 4.5 points per outing.

As we saw in Game 1 when Lillard and McCollum went off for a combined 75 points, Portland just isn’t getting enough help from its role players. Remember, that series-opening game was tied heading into the fourth before Golden State locked down Portland in the final stanza.

Then with both Lillard and McCollum struggling in Game 2, the Blazers were absolutely humiliated — leading to what is a must-win Game 3 home date on Saturday night. Even if the team’s two best players were to rebound, it might not be enough against this Warriors squad. That’s where Crabbe and the rest of the Blazers’ second-tier options must come to play.

Lowry’s playoff struggles are now becoming something that will end up defining an otherwise tremendous career. Here’s a guy that’s shooting at just 38 percent while averaging just 14.7 points and 4.7 assists in 46 career postseason games. It really has not been any better this year. In fact, one could conclude that Lowry has regressed from previous playoff appearances.

Lowry and his Raptors were absolutely embarrassed on the road by Milwaukee on Thursday. They lost by 27 points and were down by over 30 heading into the final stanza. For his part, Lowry shot just 4-of-10 from the field and added a grand total of 13 points. This came after a Game 1 performance that saw the All-Star score just four points on 2-of-11 shooting. Ouch.

There’s a common denominator here. When Lowry plays well in the playoffs, Toronto has team-wide success. That was magnified in a Game 2 performance in which he dropped 22 points on 50 percent shooting.

Now down 2-1 in the series and pretty much facing a must win in Game 4 over the weekend, Lowry must step up in order for the Raptors to avoid falling into a massive hole. Based on what we’ve seen throughout his career, this will most definitely be a difficult task. 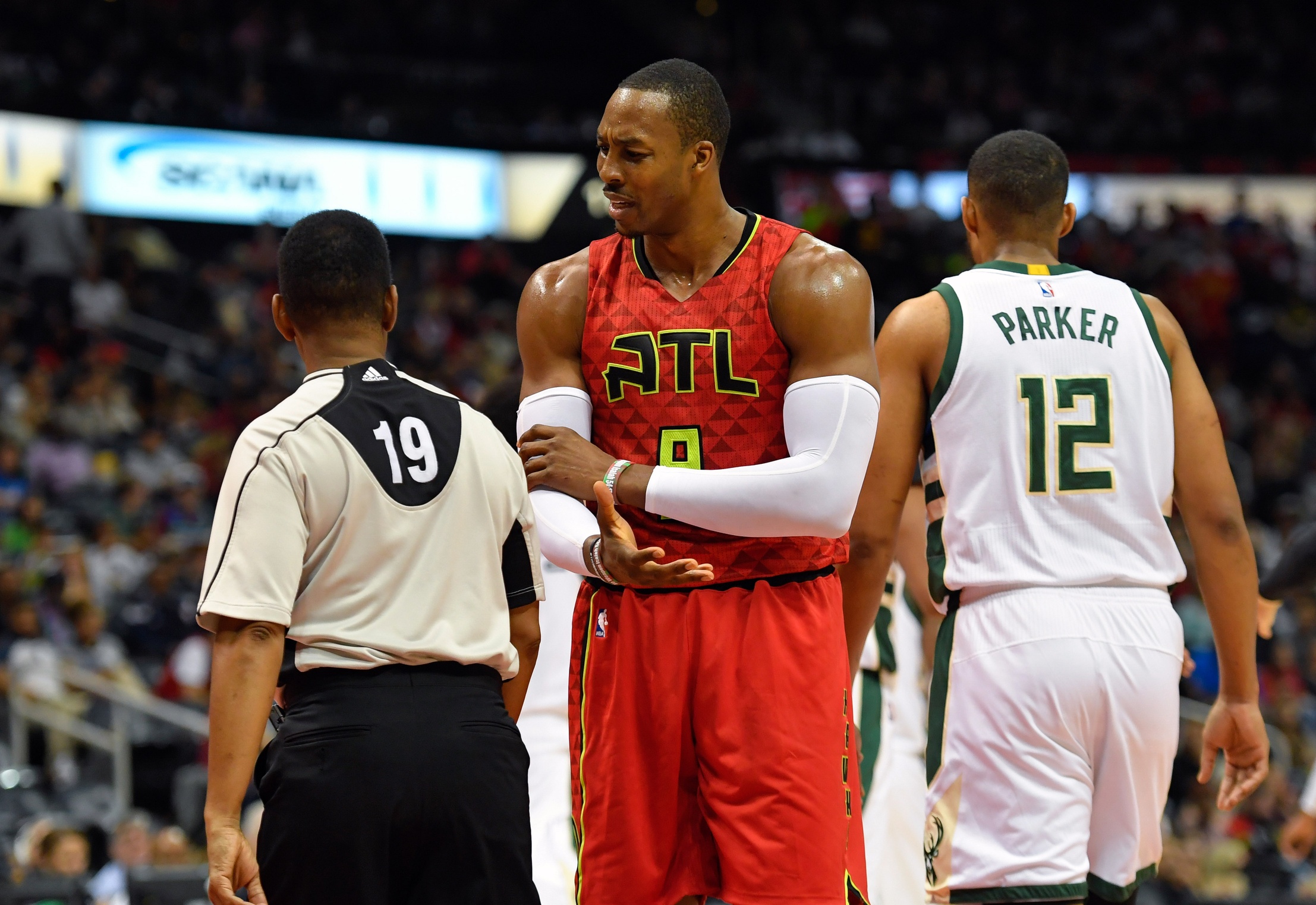 Howard stepped up his game in his first year with Atlanta, averaging 13.5 points and 12.7 rebounds while shooting an extraordinary 63 percent from the field. Unfortunately, this has in no way translated to the first round of the playoffs against Washington. Instead, Howard looks more like the player Houston jettisoned out of town quicker than an anti-drilling group.

Through the first two games of the series (both losses), Howard has yet to hit the double-digit scoring plateau. He put up just six points in Game 1 before adding a single point to that total in the Hawks’ latest loss. Equally as disturbing, Howard has taken a grand total of 11 shots.

We’re not expecting him to automatically morph into that man who averaged 20-plus points on a consistent basis earlier in his career. That time surely has passed. But with Atlanta struggling to keep up against a high-scoring Wizards offense, it’s high time Howard shows more aggression on offense. If that doesn’t happen, this series will likely end in a sweep.

A lot of criticism has been thrown Russell Westbrook’s way after he put up 43 shots, including 18 in the fourth quarter Wednesday against Houston. Sure Russ it to blame for going hero ball (more on that below), but his “supporting cast” surely isn’t helping him out here.

Oladipo was brought on during the summer to act as a second option behind Westbrook. We knew that he wouldn’t fill Kevin Durant’s shoes, but the ongoing assumption was that this former lottery pick would mesh well with Russ in OKC. That’s exactly what happened during the regular season. Oladipo averaged 15.9 points and shot a solid 36 percent from distance.

In Oklahoma City’s two losses to start its series against Houston, Oladipo has been embarrassingly bad. How bad? Some might conclude it’s time to bench the young guard. He shot 5-of-26 (19 percent), including 1-of-13 from distance. He also tallied a grand total of 17 points in those two games in Houston.

Unless Oladipo finds a way to turn this around or someone else steps up in his stead, Westbrook will continue to play hero ball. That surely won’t equate to a competitive series against what is actually a well-rounded Rockets team. 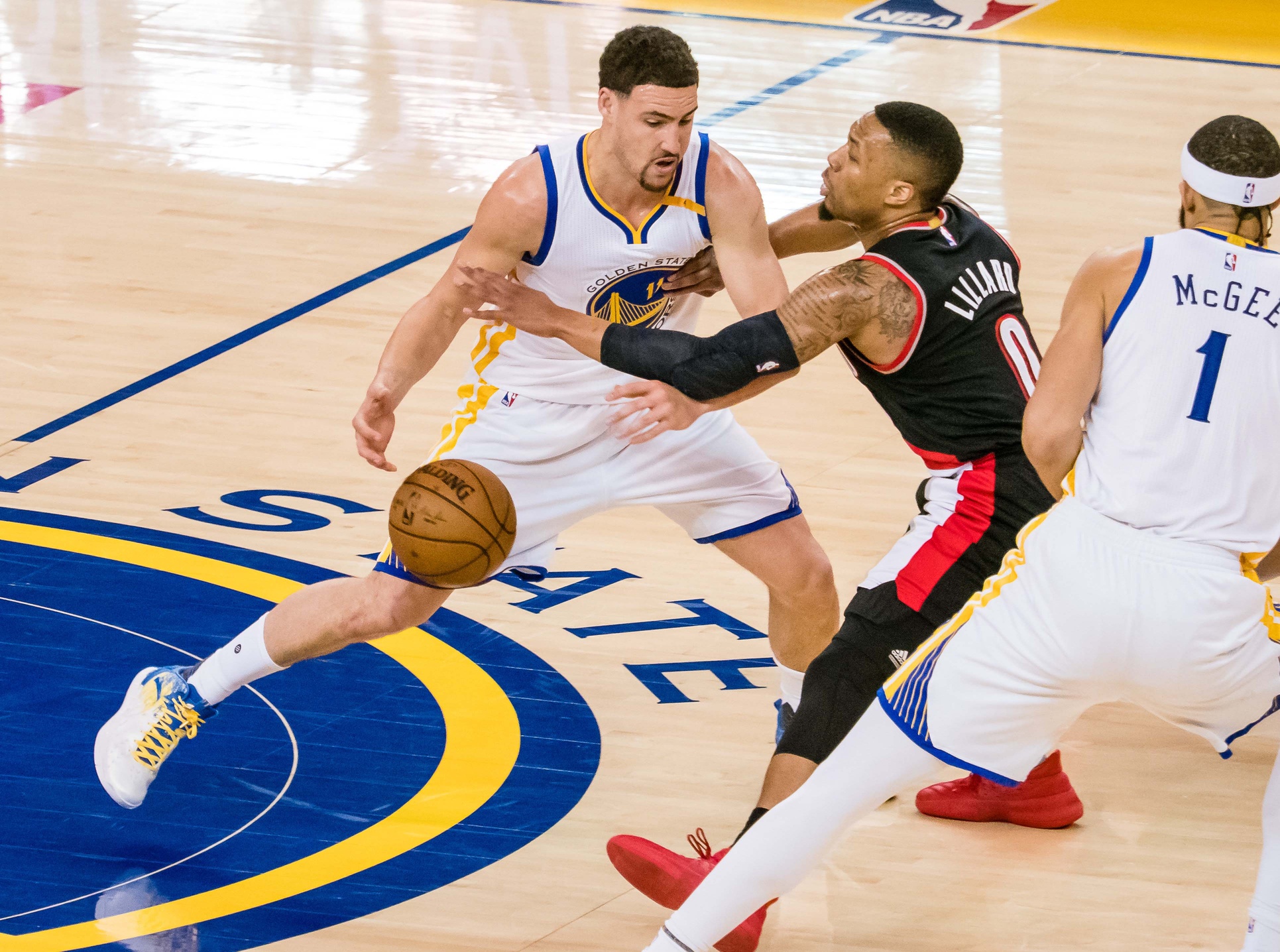 Golden State boasts a 2-0 series lead over Portland. It absolutely dominated without Kevin Durant in Game 2, winning by 29 points. Simply put, the Blazers are no match for the regular season’s best team. That’s fine and dandy, but Thompson has not done his part to change the game thus far in the series.

He’s averaging just 15.5 points and shooting at a 36 percent mark from the field. This includes a 29 percent mark from distance. We must also mention that Thompson is averaging four turnovers per game and allowed C.J. McCollum to go off for 41 points in the series opener. That’s not indicative of a player many believe deserves a spot on the All-NBA Defensive Team.

It likely won’t matter against Portland, but Thompson’s game will need to improve moving forward in the playoffs. The Warriors might be freakishly good, but they can’t rely on players not named Klay, Steph, Kevin and Draymond to shoot 70 percent from the field like what we saw in Game 2.

Let’s get this out of the way first. No matter how well Westbrook plays, the Thunder will not make a series out of this unless someone else on the team steps up. Still, it’s rather alarming just how poorly the MVP candidate has played through the first two games.

Throwing out the fact that he’s averaging a triple-double through two games, Westbrook has been downright atrocious. He’s turned the ball over a total of 13 times in two games and is shooting 35 percent from the field. Did we mention that Russ has hoisted up 66 shots in two games? Anyone of substance in the NBA would be able to put up 73 points under those circumstances.

More than anything, Russ needs to start performing within the confines of Billy Donovan’s system. This is what made him a legitimate MVP candidate for a Thunder team that finished as the sixth seed out west. He put up awe inspiring, historical numbers within what was asked of him on offense.

That simply has not been the case through the first two games of the playoffs. Westbrook is trying to do too much. And while the rest of his teammates are to blame, he is the leader of this squad. From here on out, he will either try to instill confidence in the rest of his roster or continue to play hero ball. How Westbrook goes about this will determine whether the remainder of the series is competitive.