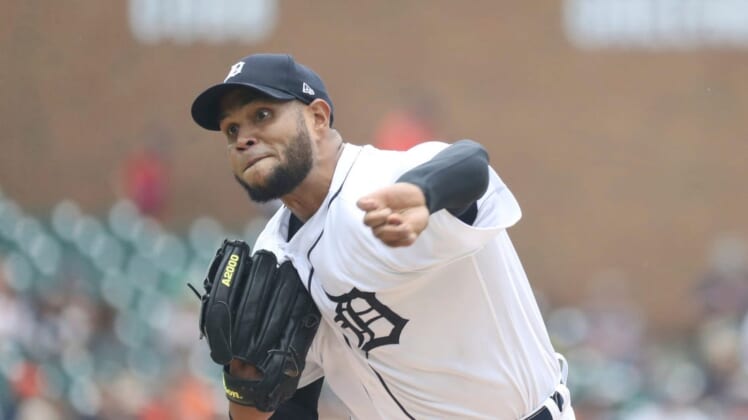 Rodriguez (2-3) gave up four hits and three walks and struck out five. He had a stint on the injured list with a rib cage injury, then was placed on the restricted list for personal reasons.

Will Vest, Jason Foley, Andrew Chafin and Gregory Soto each tossed an inning of relief to complete the shutout.

Angels starter Shohei Ohtani (10-8), who was battling a stomach virus, gave up three runs on five hits and four walks in four innings. He was lifted for a pinch-hitter in the fifth. Mike Trout reached base three times, including two hits.

The Tigers had a chance to build on that lead in the second. Willi Castro led off with a double and Akil Baddoo reached on a two-out infield single. Greene walked to load the bases but Reyes grounded out.

The Angels had two baserunners with one out in the third. Rodriguez then struck out Ohtani before Greene, playing center field, robbed Luis Rengifo of a run-scoring hit with a diving catch.

Reyes made a big defensive play in right field in the next inning, leaping at the wall to steal a home run away from Taylor Ward.

Ohtani encountered trouble in the fourth, walking both Baddoo and Greene with two outs after getting ahead 0-2 in each at-bat. Reyes smacked a triple to give Detroit a 3-0 lead.

Detroit increased its lead to 4-0 against Jimmy Herget in the fifth. Castro was hit by a pitch with two down and Kody Clemens drilled a run-scoring double.

The Angels also left two baserunners in the fifth. Jo Adell had a two-out triple in the eighth but Chafin struck out Jared Walsh to keep Los Angeles scoreless.