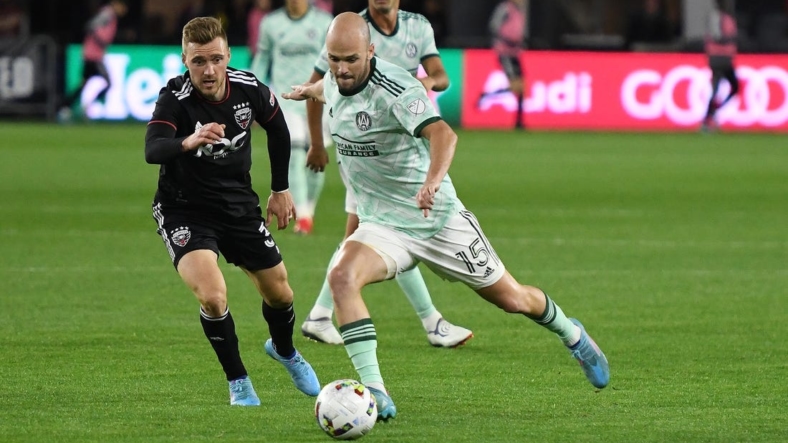 Hungry for something to celebrate, the two worst teams in the MLS Eastern Conference will meet Sunday afternoon when host Atlanta United FC take on D.C. United.

D.C.’s problems this season have been twofold — the club hasn’t been able to score at a consistent pace and it hasn’t been able to prevent its opponents from scoring either. DCU has the worst goal differential in MLS at minus-27 and is coming off a 6-0 loss at home to the Philadelphia Union.

The club made a coaching change more than a month ago, bringing on Wayne Rooney to manage the squad. He is, of course, not only a former D.C. United player, but was a legendary scorer for Manchester United and the English national team. Since Rooney took over though, the club is 1-4-1.

“I knew the difficulties we’d have and where the season was,” Rooney said. “Of course I knew that and I think we felt if I could come in and get a run of form there’s a possibility of making playoffs. I think that’s gone. Let’s be realistic on that.”

After making the playoffs in each of its first three seasons of existence — and winning the MLS Cup in 2018 — Atlanta is barreling toward missing the postseason for the second time in the past three seasons.

Still, with just eight matches to go, the Five Stripes are only five points below the playoff line. If things break the right way, they could sneak in.

“We’re in a tough spot, but the last thing I or anyone else at the club is going to do is make excuses,” Atlanta vice president Carlos Bocanegra told Fox Sports last week. “We’re trying to get on with it, plug holes, and let’s see if we can get over the line.”

That starts with getting a victory on Sunday. This will be the second meeting between Atlanta and D.C. this season. The Five Stripes topped the Black-and-Red in the first meeting, 1-0, on April 2.

“This is a huge, massive game for us to try and climb up the table and get closer to where we want to be,” Atlanta winger Brooks Lennon told the Atlanta Journal-Constitution.