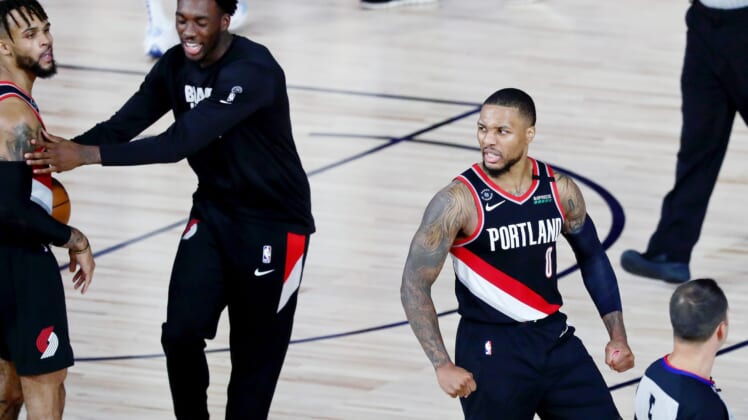 The 2020 NBA Playoffs in the Eastern Conference are already set. That’s close to becoming the case out west with the exception of a play-in tournament between the Portland Trail Blazers and Memphis Grizzlies

With the playoffs slated to start at Walt Disney World in Orlando on Monday, there’s a whole heck of a lot to look at in the Western Conference. Can the top-seed Los Angeles Lakers rebound after tough go at it in Orlando? What can we expect from the Houston Rockets?

Following his 42-point outing in Thursday’s must-win game against the Brooklyn Nets, Dame has now scored more points (154) in a three-game stretch than any other player in modern NBA history. Think about that for a second before concluding that the struggling Memphis Grizzlies have a chance against Portland on Saturday.

Minus Jaren Jackson Jr., the Grizzlies would have to win both Saturday and Sunday to force Portland out of the Orlando bubble. That’s not going to happen. Look for Lillard to go off for 40-plus again Saturday, leading to a first-round series against the Lakers.

Kawhi Leonard and Co. have been pretty questionable in Orlando heading into Friday’s regular-season finale. The team has posted a 4-3 record with a disheartening loss to the Phoenix Suns mixed in. The above-mentioned struggles have been magnified by some off-court issues. Lou Williams missed the first two games in Orlando after violating the NBA’s COVID-19 protocols. Star reserve Montrezl Harrell just returned to the bubble after dealing with a family tragedy.

On the other side sits a Mavericks squad relying on one of the most electric players in the game in that of Luka Doncic. The sophomore has averaged 30.0 points, 10.1 rebounds and 9.7 assists in seven games since the season resumed. Unfortunately, it won’t be enough for Dallas. Expect the Clippers to come out on top in six games.

What we’ve seen from this second-year player at Walt Disney World is nothing short of extraordinary. The former first-round pick saw very limited action before the season was suspended back on March 11. Since then, the former Missouri star is averaging 22.0 points and 8.6 rebounds on 55% shooting in seven games.

Porter Jr. and his Nuggets will be taking on the Utah Jazz in the first round of the playoffs. This could be a mismatch in Porter’s favor now that Jazz small forward Bojan Bogdanović is sidelined. Despite his stellar offensive play, it’s unrealistic to expect the Joe Ingles to guard the sophomore on the outside. This will lead to a seven-game series win for Denver and a new rising star in Mile High City.

I covered this a bit earlier in the week. Now that the Rockets know they’ll go up against the Oklahoma City Thunder in Round 1, there’s a whole lot of backstories here. James Harden taking on his former team without running partner Russell Westbrook, who is sidelined to injury. The potential end of the Harden-led Rockets we see today against an upstart Thunder team.

Everything seems to be pointing in the direction of more playoff failures in Houston. And that’s where I am going with this. Minus Russ, the Rockets simply don’t have the scoring advantage to make up for their lack of defense and size. It will lead to Harden averaging north of 45 points per game in a six-game series loss to Oklahoma City.

Blazers upset Lakers in Round 1

In somewhat stunning fashion, Los Angeles lost five of its final six regular-season games. Sure LeBron James and Co. clinched the No. 1 seed out west relatively early, but it still has to be considered concerning. The Lakers have issues at point guard, they have not found a right rotation thus far. James struggled since resuming the season.

On the other hand, Portland is riding high following Thursday’s do-or-die game against Brooklyn. Lillard is averaging a whopping 37.6 points since the season resumed. Now that Jusuf Nurkic has returned to form and with Carmelo Anthony in the midst of a rebound performance, look for Portland to pull off one of the greatest first-round upsets in NBA Playoff history in taking out the Lakers in seven.