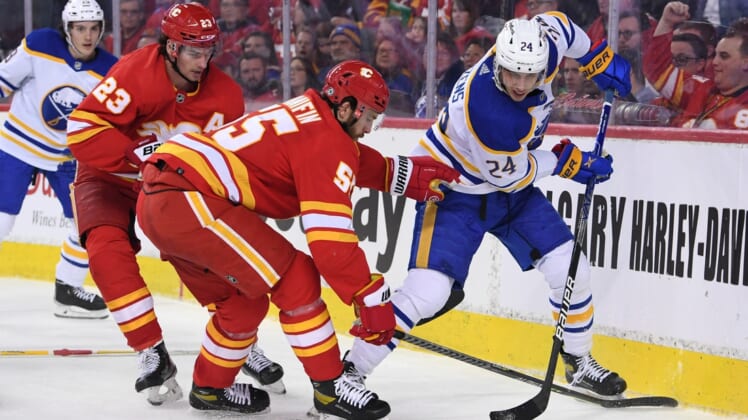 Dustin Tokarski made 24 saves for his first shutout in eight years to lift the visiting Buffalo Sabres to a 1-0 win against the Calgary Flames on Friday.

Tokarski’s only previous shutout came on March 16, 2014, when he made 29 save for the Montreal Canadiens at Buffalo.

Tage Thompson scored at 3:07 of overtime when Calgary goalie Jacob Markstrom came out of his net and whiffed on a clearing attempt, giving Thompson an empty net. Buffalo improved to 5-3-0 in its past eight games.

Goaltending was on display at both ends as each side attempted to break the scoreless deadlock.

In the first period, Tokarski got in front of a Johnny Gaudreau attempt as the winger moved in tight to the net midway through the frame. Moments later at the other end, Markstrom got his stick on Kyle Okposo’s shot from the right circle on the rush. Shortly thereafter, the Flames netminder denied Jeff Skinner on a breakaway.

The goalies continued to stand tall in the second period, upping the impressive saves. Markstrom stopped Rasmus Asplund as the Buffalo defenseman cut through the slot early, and nearly eight minutes in, he held off Skinner again on a backhander from the low slot.

Markstrom made one of his best saves of the night halfway through the second when he got his right pad on defenseman Mattias Samuelsson’s shot. The attempt came off a cross-ice feed from Zemgus Girgensons.

Tokarski earned a spot on the highlight reel less than two minutes later, robbing Flames newcomer Calle Jarnkrok in front to the right with a diving stop. Jarnkrok was acquired Wednesday in a trade with the Seattle Kraken.

The Sabres goalie was at it again in the third period, getting over for a point-blank save on defenseman Christopher Tanev, who was streaking in on the right.

Gaudreau had a chance on a breakaway with under four minutes to go in the third, but his shot missed the net.