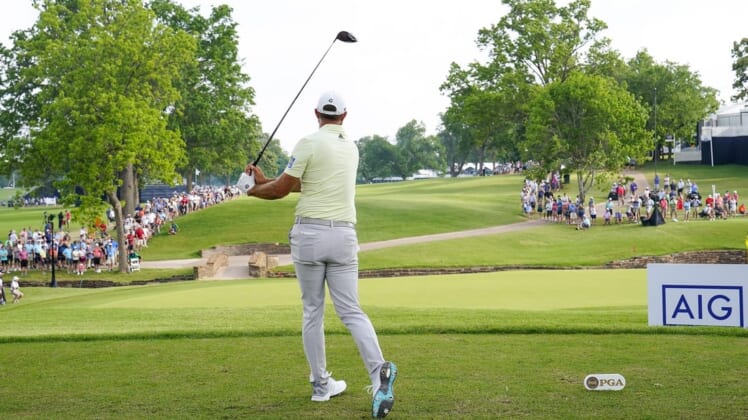 Dustin Johnson’s anchor sponsor, Royal Bank of Canada, could soon cut bait with the golfer over his entry into the Saudi-backed LIV Tour.

“RBC is a proud partner of the PGA Tour. Our partnership is anchored with two world-class golf tournaments — the RBC Heritage and the RBC Canadian Open,” the statement read. “The PGA Tour has been clear about its intentions in accordance with its tournament regulations should a golfer choose to play in a tournament outside the tour, including the LIV Golf Invitational Series.

“We were recently made aware that Dustin Johnson made the decision to play the LIV Golf Invitational Series opener. DJ has been a valued RBC team member since 2018. While we are extremely disappointed in his decision, we wish him well.”

Greg Norman celebrated the addition of Johnson to the new tour as the arrival of free agency in golf.

“This is an opportunity to start a movement that will change the course of history by bringing new and open competition to the sport we all love. The desire shown by the players to participate in LIV Golf demonstrates their emphatic belief in our model and confidence in what we’re building for the future,” he said. “We couldn’t be happier at the diversity of our field, featuring players from around the world including major champions and those making their debut with us competing in their first professional event.”

Johnson, 37, was the biggest previously-unreported name in the field for the tour-opening event, which does not include six-time major champion Phil Mickelson. The circuit, seen as a potential rival to the PGA Tour, became controversial for accepting financing from Saudi backers.

Johnson, who has dropped from third to 13th in the Official World Golf Ranking this year, is the highest-ranked played listed in the field. The former world No. 1 previously said in a statement that he was “fully committed to the PGA Tour.”

Johnson and several other PGA Tour stars said in February that they were committed to the PGA Tour, and Mickelson issued a mea culpa for his actions and took a leave of absence from the game. He did not compete in the Masters or the PGA Championship, the first two majors of the season.

Mickelson’s representatives filed a request for him to play in the LIV event at the same time that he registered for the PGA Championship and U.S. Open. After he withdrew from the PGA the Friday before it began, it’s unclear when he will make his return to the sport.