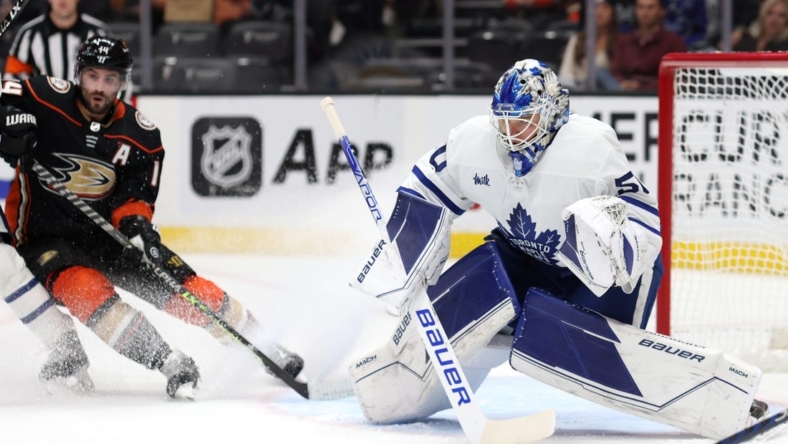 Trevor Zegras scored his second goal of the game at 2:15 of overtime and the Anaheim Ducks came back to defeat the visiting Toronto Maple Leafs 4-3 on Sunday.

Zegras finished a rush with a shot from the left circle for his sixth goal of the season, ending Anaheim’s seven-game losing streak. The Ducks trailed 3-1 less than a minute into the third period.

Matthews scored his third of the season from the slot on a power play at 4:23 of the first period on a pass from Nylander. Mitchell Marner also had an assist. Adam Henrique was off for hooking.

Silfverberg tied the game with his third goal of the season at 11:23 of the first following a Toronto turnover behind the net. Derek Grant and Isac Lundestrom picked up assists.

Malgin scored his second goal of the season with a backhand on a breakaway at 17:50 of the first after Nylander’s pass put him in the clear. Nicholas Robertson also earned an assist.

Anaheim’s Troy Terry hit the crossbar with a shot at 11:22 of the second period.

Kallgren stopped Grant on a breakaway with six seconds left in the second period. Matthews was called for slashing on the play, and the Ducks started the third period with the man advantage.

Jarnkrok scored his second goal of the season 45 seconds into the third period, a short-handed goal set up by Alexander Kerfoot after an outlet pass from TJ Brodie.

Kerfoot was stopped on a penalty shot at 6:25 of the third.

Zegras brought the Duck to within 3-2 with his fifth goal this season at 7:24 of the third after Marner’s turnover. Terry earned an assist.

Kulikov scored his first of the season on a wraparound at 13:01 of the third, with Frank Vatrano and Kevin Shattenkirk assisting.

The Ducks put the puck in the net at 15:08 of the third, but it was waved off because of goaltender interference.