Draymond Green on the Warriors: ‘I want to spend my career here’ 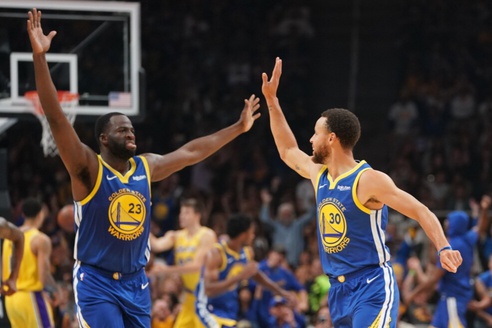 As the Golden State Warriors attempt to three-peat as NBA champions, there’s a ton of uncertainty surrounding this franchise moving forward.

Kevin Durant, DeMarcus Cousins and Klay Thompson are all slated to become free agents following the 2018-19 campaign. Meanwhile, Draymond Green will follow them on to the open market the next summer.

There’s a decent chance that the current version of Golden State’s big four could be playing its final season together. As the Warriors also play their final season in Oakland before a move to San Francisco, everything seems to be up in the air.

The good news? Both Durant and Thompson seem like they want to remain with the Warriors for the remainder of their careers. The bad news? Financially, it just might not be feasible. The backdrop here is that Durant will almost assuredly take visits with other teams once the summer of 2019 comes calling.

While his situation is a bit further down the line, Draymond Green is seemingly mirroring both KD and Klay in indicating that he wants to remain with the Warriors.

“I want to be here a long time. I want to spend my career here. I am committed to being here,” Green told The Athletic’s Anthony Slater.

In no way does this mean that will happen. The financials are something Golden State’s brass has to take into account moving forward. If it were to keep the core four together long term, assuming Green and Thompson receive max contracts, the tax totals for this organization would be huge.

Deep runs in the playoffs help offset this ridiculous luxury tax. A new waterfront arena in San Franciso will also help Golden State’s ownership commit to what could be a $400-plus million payroll by 2020-21.

Even then, there’s an open question about Golden State’s willingness to pay Green on a max deal.

A three-time All-Star and three-time NBA champ, Green’s value to the Warriors goes far beyond the box score. He knows this. The team knows this. Whether that leads to him finishing his career in Northern California remains to be seen.