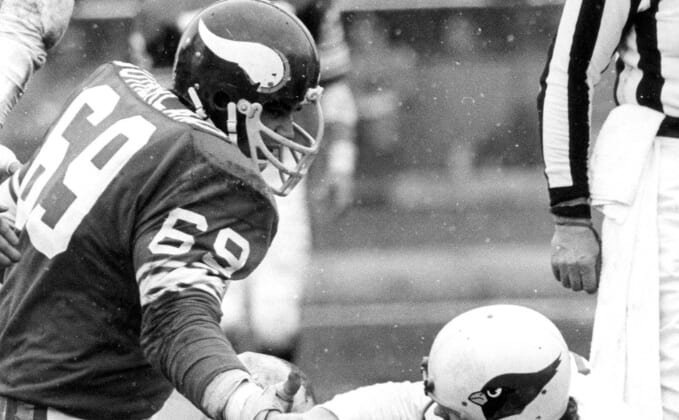 Defensive lineman Doug Sutherland was an original member of the Minnesota Vikings‘ “Purple Peaple Eaters” defense. He’s also renowned as one of the 50-greatest players to ever suit up for the Vikings.

Sadly, the organization announced on Tuesday that Sutherland has passed away at the age of 73.

“Doug Sutherland was one of our proudest Legends. His humble nature did not allow for him to talk much about his own playing career, but Doug was a key member of some of the best defenses in NFL history and three Super Bowl teams.

Doug was also the consummate teammate after football. He was one of the most active members of Vikings Legends events and didn’t miss a chance to help out at a community event or lend a hand where needed. Our thoughts are with Doug’s friends and family.”

A 14th-round draft pick of the New Orleans Saints back in 1970, Sutherland joined the Vikings the following season.

He’d ultimately become a part of their famed defensive front with the likes of better-known stars such as Alan Page, Gary Larsen, Carl Eller and Jim Marshall.

Sutherland’s claim to fame in Minnesota came in 1975 when he replaced Larsen in the starting lineup. That season saw him record six sacks en route to helping Minnesota go 12-2 before losing to the Dallas Cowboys in the divisional playoffs.

Having suited up with the Vikings from 1972-1980, Sutherland finished his career with 29 sacks in 138 games (90 starts). Those 90 starts are fourth among Vikings defensive tackles behind John Randle, Kevin Williams and the aforementioned Page. He also played in three of the Vikings’ four Super Bowls.

Years after being named one of the 50 best Vikings to ever play, Sutherland touched on what his time with the organization meant. In particular, playing under famed former Vikings head coach Bud Grant.

“The first guy I want to thank is Coach Bud Grant. I learned a lot from him, how I live my life and how to coach and lead people.

The funny thing about Bud is he never yelled at you. If you did something wrong, most of the time, he would just give you that look and you’d go beat yourself up over it. He was a great coach, and we had a lot of fun.”