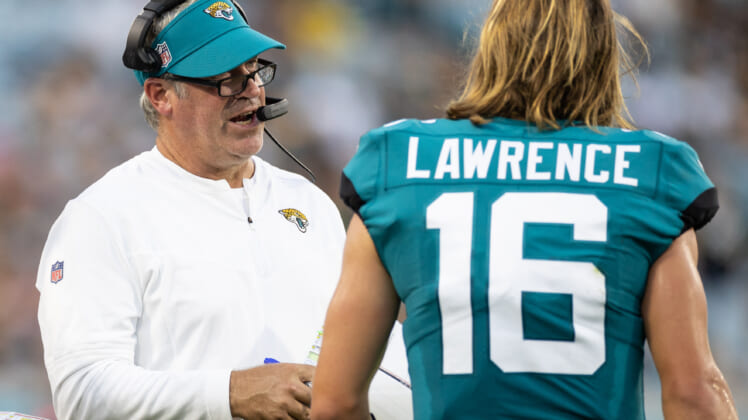 Jacksonville Jaguars head coach Doug Pederson didn’t get to be around Trevor Lawrence for his rookie season. Based on how his first year in the NFL went, the No. 1 overall pick from 2021 likely wishes he had the Super Bowl-winning coach by his side instead of Urban Meyer.

But the Jags don’t have a time machine, so they’re focused on year two in Lawrence’s development.

It’s not that the former Clemson star was bad by any measure in his first NFL season. It’s just that he also didn’t convince anyone he’s set to become a superstar either, which is still the expectation for the generational quarterback prospect.

In addition to the work they’ve put in together during training camp and in the preseason, new head coach has already identified one area where Lawrence can take a big step forward.

Speaking with the media following their Week 2 preseason matchup on Saturday, Pederson shared one key that could help Lawrence adjust as he prepares for his second season.

Specifically, Pederson was talking about Lawrence’s Week 2 preseason performance, where he completed 14-of-21 passes for 133 yards. It’s not a bad line, but both Pederson and Lawrence know the QB can do much better.

Year two will be completely different for Trevor Lawrence for a number of reasons. Perhaps the biggest factor is that he’s finally in a fully professional atmosphere with Urban Meyer replaced by a legitimate NFL head coach with decades of experience both as a player and instructor with Doug Pederson.

Plus, the Jags figure to have a much better group of skill position players, including the return of Travis Etienne who’s set to make his NFL debut after missing his entire rookie season with injury. With a full receiving corps, whether it’s size with Marvin Jones and Zay Jones, or speed with Christian Kirk and Evan Engram, Lawrence’s weapons are much improved.

The Jaguars also continued to build the trenches, bringing in Brandon Scherff to help shore up the protection. Instead of being used to chaos as a rookie, now Lawrence can settle in and get comfortable throwing from the pocket, and that alone should help him get into a groove in his second year down in Duval.