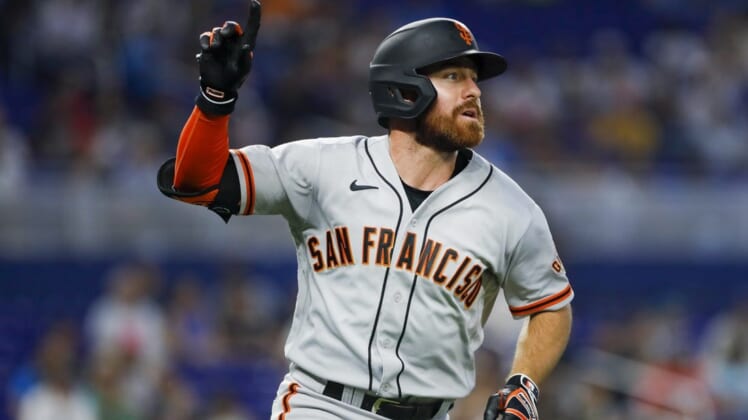 Donovan Walton hit his first career grand slam and Jakob Junis tossed six strong innings as the visiting San Francisco Giants earned a split of their four-game series against the Miami Marlins with a 5-1 victory on Sunday.

Junis (3-1) allowed one run on two hits with two walks and a season-high eight strikeouts. Dominic Leone, Tyler Rogers and Camilo Doval each pitched a scoreless inning to secure the victory.

Garrett Cooper homered for Miami, which was limited to five hits and lost for the 11th time in its last 16 games.

Marlins starter Braxton Garrett (0-1) made his season debut and held the Giants scoreless through three innings before running into trouble in the fourth.

After allowing consecutive singles with one out, Garrett walked Curt Casali to load the bases. Walton followed with a 421-foot blast to right field for his first homer since being traded to the Giants from the Seattle Mariners on May 11.

Garrett yielded four runs on five hits over 3 1/3 innings. He walked one and struck out five.

The Marlins scored their lone run on Cooper’s one-out solo homer in the sixth against Junis, who threw a season-high 96 pitches. Cooper had two hits and went 7-for-13 for the series.

San Francisco added an insurance run in the eighth when Casali scored from third on Austin Slater’s two-out single against Anthony Bass.

Casali had two hits and two runs for the Giants, who concluded their 10-game road trip with a 5-5 mark.

The Marlins threatened with two runners on and two outs in the eighth, but Jorge Soler grounded out to end the inning.

After going 15 straight games without a stolen base, San Francisco had three on Sunday. Thairo Estrada had two steals, giving him eight for the season.

Miami second baseman Jazz Chisholm Jr. entered the game in the fifth inning as a pinch hitter and was hitless in two at-bats. Chisholm went 0-for-14 during the four-game series.