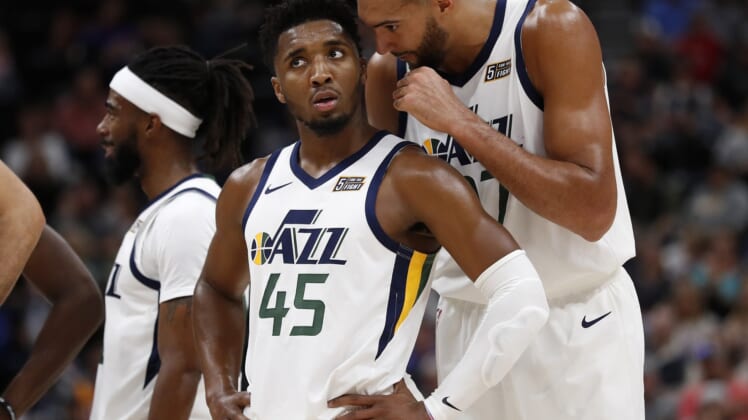 The Utah Jazz will resume their season July 30 at Walt Disney World in Orlando. One of the best teams in the NBA prior to the season being suspended, a lot of pressure will be on Utah.

There’s an obvious backdrop to this. Rudy Gobert’s positive COVID-19 test led to the NBA season being suspended back on March 11. One day later, teammate Donovan Mitchell tested positive for the virus.

It appears everything is good months after the fact.

This wasn’t always the case. A previous report this past spring indicated that the relationship between Mitchell and Gobert was irreparable. Gobert was seen joking about the virus prior to being infected. It led to some major drama behind the scenes in Salt Lake City.

Mitchell did touch on that. But he’s ready to move on.

“I really wish that, going forward, I think that will be the primary focus, us jelling as a team,” he continued. “Obviously, Rudy and I had COVID and whatever happened, happened. But now we’re ready to hoop and focus on the team as a whole.”

Mitchell’s comments come on the same day it was reported that 25 players have tested positive for the virus over the past week-plus. That represents less than 8% of those tested, but it is still worrisome.

Despite the increase in COVID-19 cases around the United States, the NBA is forging ahead with restarting its season at Walt Disney World in Orlando late this month.

The interesting (and scary) dynamic here is that Florida just saw 10,000-plus newly confirmed COVID-19 cases within the past 24 hours (at the time of this article’s publication).

There’s concern the virus itself could halt the restart of the season, something NBA Commissioner Adam Silver admitted recently.