Dolphins look to crank up offense against Lions 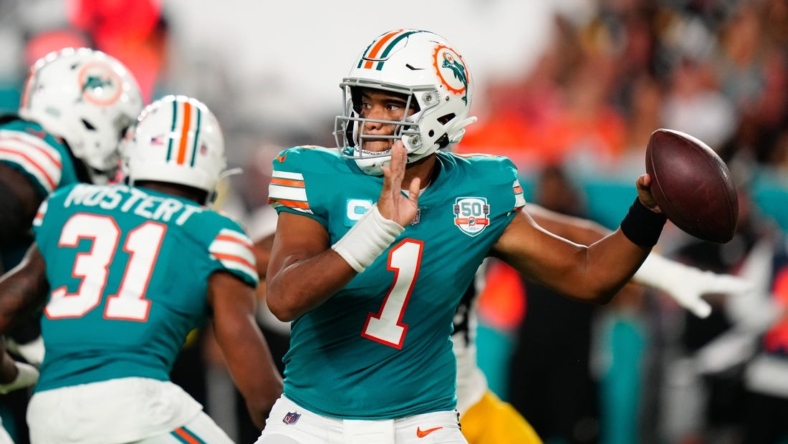 Quarterback Tua Tagovailoa made it through Sunday’s game without any issues. Now, he and his Miami Dolphins teammates want to be more productive as they head to Detroit to face the struggling Lions this Sunday.

Tagovailoa returned to action after he was placed in concussion protocols and missed the previous game. The Dolphins’ lone touchdown against Pittsburgh came on the opening drive, but they still came away with a 16-10 victory.

Tagovailoa got the ball out of his hands quicker and passed for 261 yards without an interception or a sack. But he doesn’t want to continue to settle for field goals.

Miami (4-3) hasn’t scored more than 21 points since Tagovailoa threw for six touchdowns against Baltimore in the second week of the season. With their No. 1 quarterback targeting receivers Tyreek Hill and Jaylen Waddle, the Dolphins should be able to put up plenty of points the rest of the way.

They’d rather not see Tagovailoa scrambling for yardage, as he did on four occasions against the Steelers. But sometimes instincts take over.

“To me, it’s football,” he said. “I can see the first down in instances and want to do all that I can to get it. I want to be able to continue making plays that I feel can contribute to moving the chains and helping the team.”

Hill and Waddle have combined for 91 receptions, 1,394 yards and five touchdowns.

“Star players really have to put the most on their shoulders with their given preparation each week. They can’t afford to just take a game off,” coach Mike McDaniel said of his receiving duo. “When pressure situations happen, they have to perform.”

Lions coach Dan Campbell is concerned about trying to contain them while not conceding too much in the ground game.

“The gameplan for these guys has got to be spot on,” he said. “These guys present quite a challenge. They’ve got a couple guys on the perimeter that can go (deep).”

The Dolphins can’t afford to take any weeks off in the AFC East race, with Buffalo and the surprising New York Jets ahead of them in the standings. Losing to the Lions (1-5) would be a crippling blow to their division title aspirations.

McDaniel said Detroit looks a lot better on film than its record would indicate.

“They’re hoping, they’re begging for us to take them lightly,” McDaniel said. “A team like that, with tape like that, I don’t think anybody has plans to take this team lightly whatsoever.”

Detroit has lost its last four games. Initially, the issue was a porous defense. The past two games, the offense has failed to produce a touchdown.

In their 24-6 loss at Dallas on Sunday, they committed five second-half turnovers, four by quarterback Jared Goff.

“We shot ourselves in the foot,” Campbell said. “When you plan for an opponent like we just played and you have a gameplan — this is how we must play against this opponent offensively, defensively, special teams — and then something like that happens, it’s hard to overcome.”

Top running back D’Andre Swift has been sidelined the last three weeks due to a shoulder injury. Top receiver Amon-Ra St. Brown departed early against the Cowboys due to a head injury.

Swift was a full participant in Wednesday’s practice, while St. Brown was limited and tight end T.J. Hockenson (knee) sat out.

Cornerback Xavien Howard (groin) was among the Dolphins who didn’t practice Wednesday.