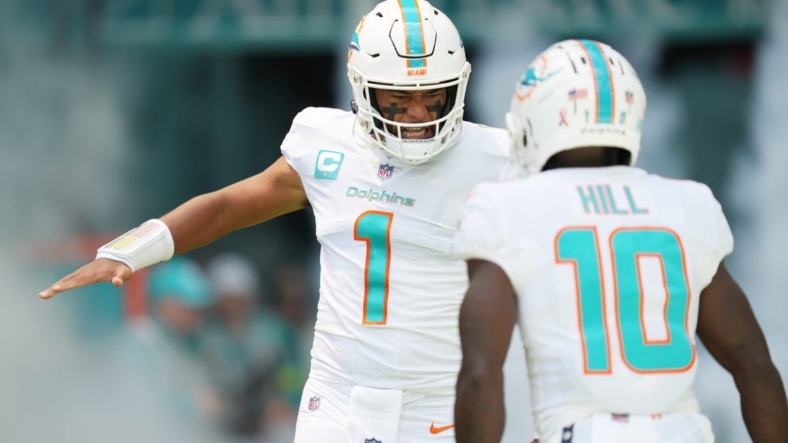 At this time last season, rumors began to surface that Miami Dolphins quarterback Tua Tagovailoa and coach Brian Flores were on divergent paths.

At this time last season, it was widely assumed that Baltimore’s Lamar Jackson would be the next quarterback to get a huge new contract that likely would keep him with the Ravens as long as both sides remained happy.

That’s why Sunday’s game between the Dolphins (1-0) and Ravens (1-0) at M&T Bank Stadium in Baltimore is filled with irony.

A late-season surge by Tagovailoa convinced mercurial owner Stephen Ross, who was reportedly ready to give up on a quarterback that he drafted fifth overall in 2020, to make a decision at the fork in the road.

Tagovailoa’s second half of last season might have convinced Ross that the Dolphins already have their franchise quarterback, especially if he added pieces around him. Jackson hasn’t fallen from good graces in Baltimore, but he is playing on the franchise tag and could be stuck there for the long term.

The Dolphins used the offseason to surround Tagovailoa with a situation that makes his life easier. They hired offensive-minded Mike McDaniel to replace Flores, a longtime defensive coach.

Perhaps even more help for Tagovailoa came from an offseason trade with Kansas City for wide receiver Tyreek Hill. The Dolphins already have Jaylen Waddle, a first-round pick in 2021, who set a new NFL record for receptions by a rookie (104).

So, what do you get when you add the six-time Pro Bowler Hill to Waddle? Well, if the season-opening win against New England is any indication, the answer is a combined 12 receptions for 163 yards and a touchdown.

It’s too early to call Tagovailoa “elite” but he’s approaching that territory. He’s No. 9 in NFL passer rating after Week 1 and he and McDaniel are still a work in progress.

“What I really liked was that he made plays in each quarter because, to me, that’s good quarterback play,” McDaniel said. “The hardest thing is between your ears to deal with this position in the National Football League. You have all this stuff going on. You have high expectations for yourself and for the offense and when it’s not — anytime you have a three-and-out or it’s kind of herky-jerky you can get frustrated.

“But he found ways to make plays even after plays that he was frustrated at, which a lot had to do with me — so together we’ll keep moving forward and I’m excited to do so.”

What Jackson did in last week’s opener against the New York Jets was no big surprise. He didn’t look much different than the guy who was the NFL’s unanimous Most Valuable Player in 2019. Jackson threw for three touchdowns and, so far, his muddled contract situation hasn’t gotten in the way.

Jackson doesn’t have an agent and represented himself in offseason contract talks. The blame for the talks falling apart before the start of the season actually can be blamed on the Cleveland Browns and Deshaun Watson, who signed a five-year contract with $230 million fully guaranteed.

Usually, a new contract for a quarterback provides parameters for the next guy in line. But Watson’s contract threw the quarterback salary structure out of line throughout the league because of a full guarantee.

Although contract talks stopped shortly before the season started, things have not gotten ugly between Jackson and the Ravens. But the current labor agreement allows Baltimore to keep placing the franchise tag (with a salary less than elite quarterbacks) on Jackson for as long as the Ravens want to.

“It’s been football, football, football for players and coaches,” Baltimore coach John Harbaugh said. “That’s kind of where we’re at. My interactions with Lamar have been all football, and he’s been focused and locked in on that 100 percent, from a football standpoint.”

So, both quarterbacks have placed big bets on themselves for this season and for Sunday.

Those bets might be couched with injuries at the all-important left tackle spot. Terron Armstead (toe) didn’t practice for the Dolphins on Wednesday, but McDaniel pointed out the veteran has a history of playing hurt dating to his time with the New Orleans Saints.

Unsettled is the best way to describe a Ravens offensive line that shuffled to accommodate Ronnie Stanley (ankle) missing Week 1, only to lose Ja’Wuan James (Achilles) to a season-ending injury. James moved from right tackle to man the left side against the Jets.

Stanley and running back J.K. Dobbins, anxious to return from a knee injury that cost him the entire 2021 season, both practiced on Wednesday.

Those developments could make life interesting for quarterbacks in the spotlight.

For Tagovailoa, a strong outing and a win would be further evidence that he’s a rising star. Jackson hasn’t talked much about his contract situation. But every time he steps on the field is an opportunity to prove he deserves a huge new contract.

Of course, it would help if Jackson gets more support from his running game than he did in the opener. The Ravens managed just 63 yards rushing on 3.0 yards per carry against the Jets, marking Baltimore’s fewest rushing yards in a game started by Jackson. The Dolphins limited the Patriots to 78 rushing yards in their opener.

But the Ravens are hoping that the expected return of Dobbins, who ran for 805 yards as a rookie in 2020, will give the ground game a spark. McDaniel is unlikely to see anything from Baltimore he hasn’t seen before, but that’s no knock on the scheme.

“I’ve been following — that team has spawned a ton of ideas for me personally in the run game,” said McDaniel, who added that he’s been playing the role of Jackson in practice. “They do an unbelievable job at forcing you to defend all gaps and be sound and then they do a good job in the pass game, too, with things to balance that out. So you have to account for all 11 players on every down. You really do. You have to have a plan for all the different bells and whistles that they run.”